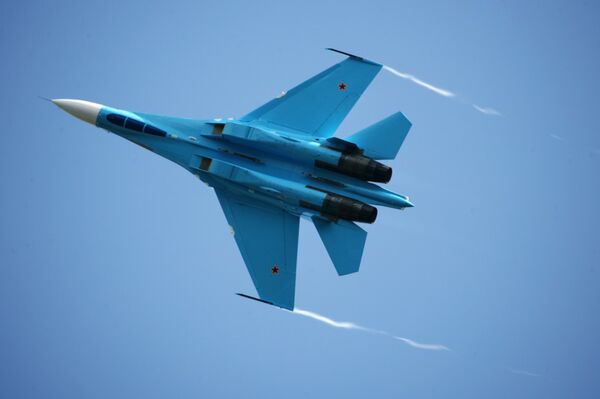 Russia's state-run arms exporter Rosoboronexport accounts for 85% of the country's arms sales worldwide, with the remainder coming from several companies authorized to deal in arms on the global market.

Russia's state-run arms exporter Rosoboronexport accounts for 85% of the country's arms sales worldwide, with the remainder coming from several companies authorized to deal in arms on the global market.

Rosoboronexport was established November 4, 2000 by presidential decree, replacing its predecessors, Rosvooruzheniye and the Promexport company.

With contracts totaling $34 billion, Russia is the second-largest exporter of arms and military equipment after the United States, and it is steadily expanding its presence on the arms market.

Russia's role as an arms exporter was seriously undermined by the collapse of the Soviet Union in 1991. In Soviet times, Moscow supplied mountains of weapons to its partners. Annual sales exceeded $20 billion in some years, though actual proceeds were much smaller because most Soviet weapons were sold on credit or provided free of charge to friendly countries and organizations.

This export structure crumbled in 1991, and the new Russian defense industry had to rebuild the entire arms-export system in the wake of total economic collapse, with the hi-tech sector among the hardest hit.

Arms shipments to India and China were a godsend for the Russian defense industry at this time.

India, which had long purchased weapons from Western Europe and the Soviet Union in line with its diversification policy, was among the few countries that could pay hard cash.

China's relations with the West soured in the late 1980s, and the country desperately needed modern weapons to catch up with the militaries and defense industries of developed nations.

It's no surprise that Russian warplanes and air-defense systems became highly popular at this time. Moscow was ready to provide state-of-the-art systems developed during its decades-long standoff with some of the powerful nations in the West.

Sukhoi jets accounted for the bulk of warplane sales. Numerous T-10-based Su-27 fighters and their modified versions were sold around the world. The company's annual production for export totaled 50 aircraft in some years.

The top management at Sukhoi played a considerable role in company's post-Soviet success - a time when other Russian aircraft brands were just barely staying afloat.

Sukhoi is now the most popular Russian aircraft brand, replacing the Mikoyan-Gurevich (MiG) Aircraft Company, which had dominated the warplane market in Soviet times.

In the late 1990s, India and China accounted for 80% of Russian arms exports. This imbalance led many in the media to doubt that Russia could sell its weapons on more competitive markets. Some voices predicted a sharp decline in sales after the Indian and Chinese markets reached saturation.

However, Russian arms exports soared in the 2000s, reaching an estimated $10 billion. Moscow signed huge contracts with Vietnam, Malaysia and Indonesia, and then consolidated this string of successes with contracts with Algeria and Venezuela.

Kuwait, the United Arab Emirates, Malaysia, Greece, South Korea and other countries, which traditionally bought weapons from the West, have also placed orders with Russian defense manufacturers, proving that Russian weapons and technology can compete with Western products.

By penetrating these markets, Russia has dispelled its image as an anti-Western supplier, selling to countries the West refuses to deal with and undercutting Western prices.

Russia soon lost this financial trump card, as the cost of its weapons and military equipment came to match similar U.S.-made systems. The higher cost of West European weapons greatly limits their export.

Notably, the most advanced Sukhoi Su-30 Flanker-C fighter versions cost $60-70 million each, or just as much as the latest Boeing F-15 and F/A-18 Hornet fighters and $15-20 million less than the Eurofighter Typhoon, which is inferior to Russian and U.S. warplanes in terms of its main specifications and performance.

Russia has completely changed its arms-export model. Instead of using arms as a means to ensure military and political balance in the Third World, Russia now sees the arms trade as a business.

Customers now buy full-fledged weapons systems with 20-30-year warranty and post-warranty support contracts, making it possible to maintain the combat readiness of these systems and to upgrade them. The West had opted for this model with its most demanding customers in the 1970s, and Russia has followed suit.

Fixed-wing aircraft and helicopters still dominate Russian arms exports, accounting for 40% of the total, followed by air-defense systems. The remainder is made up of various army and naval equipment.

This export structure is unlikely to change much in the future. Moreover, the share of army equipment is likely to shrink because Russian-made armored vehicles are nearly obsolete, and new models are lacking.

There is every reason to assume that exports of aircraft and air-defense systems will continue to grow.

Sukhoi Corporation, the Russian aircraft giant, continues to upgrade its popular T-10/Su-27 Flanker fighter and is testing the entirely new T-50 PAK FA (Future Airborne Complex - Frontline Aviation), due to be released on the global market in the late 2010s.

Russia has started building next-generation warships and will hopefully export them in the future.

All these factors, in addition to the growth trend on the arms market and the good reputation of Russian weapons, suggest that Moscow will maintain its position on the market for the next 10-20 years at least.