Russia to sell only chilled poultry from January - watchdog 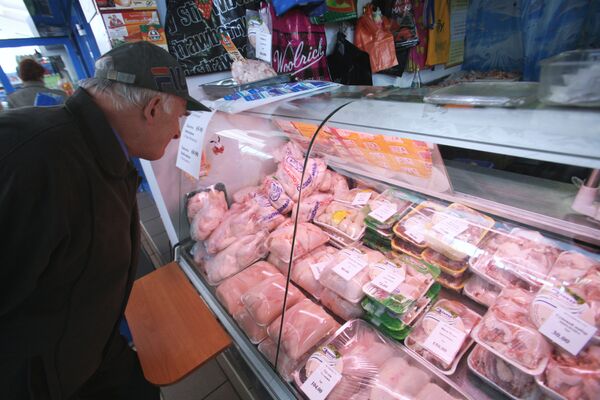 © RIA Novosti . Alexei Nikolskiy
/
Go to the photo bank
Subscribe
Russia will only allow sale of chilled, and not frozen poultry from next January, Federal Service for Supervision of Consumer Rights Protection and Human Welfare head Gennady Onishchenko said on Wednesday.

Russia will only allow sale of chilled, and not frozen poultry from next January, Federal Service for Supervision of Consumer Rights Protection and Human Welfare head Gennady Onishchenko said on Wednesday.

"The transition to chilled poultry was approved in March 2008. There will be no turnover of frozen poultry in Russia from January 1, 2011. It is an outdated and rough technology, which leads to a loss of many of the useful qualities of meat," Onishchenko told RIA Novosti.

"Everybody knew about it. This is not a new idea. This information was published long ago. All documents are registered in the Justice Ministry. This question was discussed with our producers, scientists, with Russian Academies of Medical and Agricultural Sciences. It is a corporate decision made on the basis of analysis. I have received loads of letters from governors who thank us and say that Russian producers can guarantee chilled poultry deliveries to consumers without deep freezing. "

He also said there are technologies of poultry chilling in inert gas, which permits storage of poultry for up to 120 days.

"You are welcome to import poultry, but only chilled, not frozen," he said, when asked about U.S. chicken imports.

"Slackers, who do not want to do anything, are worried. A group of importers, who knew everything, but waited until November, is worried. What's the difference for them how to poison our people?," Onishchenko said.

But Sergei Yushin, head of an executive committee at the National Meat Association, said that Onishchenko's statement was unbelievable, adding that a technology for chilling poultry in inert gas did not exist, while deep freezing helped producers and sellers store meat for a longer period.

"I can hardly imagine a producer who would be happy with a ban on frozen poultry turnover. Some consumers will be deprived of the product," he said.

Yushin said the ban raised the question of whether Russia intended to export meat, as it could not be exported chilled.

"Such a prohibition exists nowhere in the world. How does this decision fit the statement that Russia wants to harmonize its requirements with international norms and the policy of attracting investment?" he said.