Russian assistance in Afghanistan: A price to pay 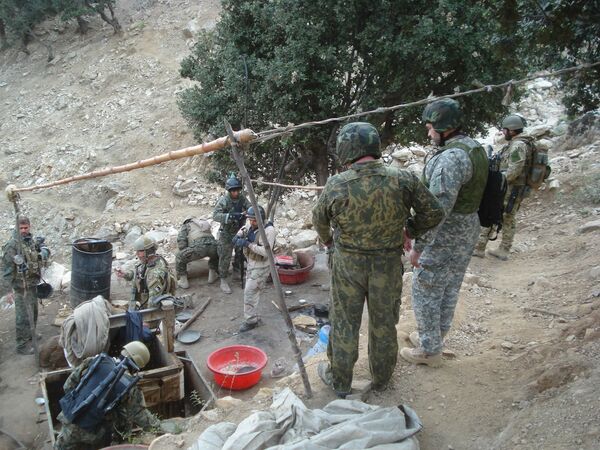 © RIA Novosti . Federal Drug Control Service of Russian Federation
Subscribe
NATO and Russia are clearly ready for improved relations, as demonstrated by the flurry of diplomatic activity ahead of the NATO summit in Lisbon on November 19-20.

NATO and Russia are clearly ready for improved relations, as demonstrated by the flurry of diplomatic activity ahead of the NATO summit in Lisbon on November 19-20. Compared to the period of friction following the August 2008 war over South Ossetia, this diplomatic surge looks very much like - if not better than - the U.S.-Russian reset.

Generals and diplomats have been jolted into action by Russian President Dmitry Medvedev's decision to come to Lisbon. Officially, he will be attending the NATO-Russia Council meeting on November 20, but he is also expected to hold a two-hour meeting with U.S. President Barack Obama as well as one-on-one talks with NATO Secretary General Anders Fogh Rasmussen and the heads of leading NATO countries.

All hands on deck

Rasmussen's visit to Moscow, originally slated for November 5, was rescheduled for November 2. Today he is meeting with Dmitry Medvedev and Foreign Minister Sergei Lavrov to discuss preparations for Medvedev's trip to Lisbon.

On November 1 and 2, there was an "all hands on deck" kind of atmosphere in Moscow, with Foreign Minister Lavrov, Defense Minister Serdyukov and Chief of the General Staff Makarov holding talks with U.S. Admiral James Stavridis, NATO's Supreme Allied Commander Europe.

The NATO delegates then met with officials from the Russian Emergencies Ministry and Security Council and generals from the Western Military District, before visiting several military training centers.

Back in September, Serdyukov met with U.S. Secretary of Defense Robert Gates at the Pentagon.

What NATO wants from Russia

Preparing for Medvedev's visit to Lisbon should not require this level of diplomatic activity.

Russia and NATO plan to sign several cooperation agreements during or after the Lisbon meeting, in particular:

to help transport NATO's military and other cargo to Afghanistan via Russia by air, rail and road;

to supply Russian helicopters to Afghanistan;

to train Afghan pilots, special forces and military, counter-terrorism and counter-narcotics units using Russian instructors or in Russian schools; and

The final agreement has a greater chance of success than one may think. Foreign Minister Lavrov said after his meeting with Admiral Stavridis that NATO and Russia have been discussing a joint missile defense shield.

But Russia would like to see more concrete proposals from NATO on a possible missile defense system and to get a better understanding of Obama's views on the project. Although the missile defense shield proposed by President Obama is quite different from George Bush's proposal, it is not as benign as the Americans present it to Russia.

Russia has also agreed to supply about 20 helicopters to the Afghan army. The Russian choppers, in particular the Mi-17 Hip, are sturdier and better suited to Afghan needs than western models. Russia has already supplied four such helicopters to Poland, a member of the International Security Assistance Force (ISAF) in Afghanistan.

There is potential for a big change in Afghanistan - a country that has meant endless, unwinnable wars and destroyed reputations for western countries in the past - but not without Russia's assistance. NATO and the United States prefer not to state this openly, but tacitly they have already admitted as much.

At the Lisbon summit, NATO plans to sign a declaration with the Karzai government on long-term ties extending beyond 2014-2015, when NATO forces will be drawn down to a minimum and security functions will be turned over to the Afghan army, police and special forces.

However, NATO will not be able to defeat the Taliban or make peace with them by that time. Peace and stability will remain elusive in Afghanistan.

Only Russia, which has been caught in the Afghan trap before, can help NATO escape. NATO also needs Russian permission to transport troops and cargo from the ice-free Baltic ports to Kazakhstan, Kyrgyzstan and Tajikistan; the route through Pakistan is no longer safe. It also needs Russian instructors to train Afghan troops and Russian assistance in counter-terrorism and counter-narcotics.

"The Russians could make life very difficult for us in Afghanistan but they don't," a western diplomat said. But this passive assistance is no longer enough for NATO; it hopes Russia will start providing active assistance.

NATO says there are no plans to reintroduce Russian soldiers, or even instructors, into Afghanistan. The prospect of being forced back into Afghanistan could prove too painful for Russia, and the political consequences for Medvedev and Putin would be grave.

Yet, Russia's agreement to help train Afghan troops, allow NATO to transport cargo across the country and conduct joint counter-narcotics operations together with the United States and NATO could put Moscow in the sights of the Taliban and Al Qaeda.

But the situation in Afghanistan will be even worse if Russia and NATO do not work together. What's more, it's in their mutual interests to join forces.

Given the porous borders between Russia and its southern neighbors and the large shipments of Afghan heroin headed for Russia every day, Moscow has no choice but to support NATO. Even a partial withdrawal of NATO troops before local buffer forces are fully trained to take over would spell catastrophe for Russia, which would be under constant siege by a well armed heroin exporting country to its south.

Russia will likely agree to help NATO in Afghanistan in return for NATO's commitment to cut its troops in ex-Soviet republics, to yield on Abkhazia and South Ossetia (which is highly unlikely), and to start destroying opium poppy plantations in Afghanistan.

Moscow can give a lot to NATO in Afghanistan, but troops are out of the question.