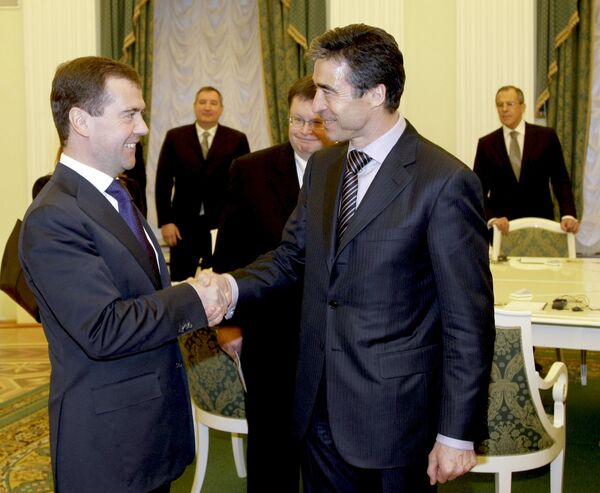 © RIA Novosti
/
Go to the photo bank
Subscribe
Russian President Dmitry Medvedev and NATO Secretary General Anders Fogh Rasmussen will discuss the Euro missile-defense project and Moscow's possible participation in it during the NATO chief's visit to Moscow on Wednesday, the Kremlin said.

Russian President Dmitry Medvedev and NATO Secretary General Anders Fogh Rasmussen will discuss the Euro missile-defense project and Moscow's possible participation in it during the NATO chief's visit to Moscow on Wednesday, the Kremlin said.

Rasmussen is visiting the Russian capital ahead of the Russia-NATO Council summit on November 20 in Lisbon. Medvedev has said he will take part in the top-level talks for the first time since the August 2008 war between Russia and Georgia, which soured Russia's relations with the alliance.

Medvedev will use the meeting to find out more about the proposed Euro missile-defense system so it can make a thorough assessment on the threat it poses to Russia, Moscow's envoy to NATO Dmitry Rogozin said earlier on Tuesday.

Rasmussen has repeatedly said that a decision on the implementation of the project needs to be made at the forthcoming NATO summit.

Russia has retained staunch opposition to the deployment of anti-missile defense systems near to its borders, claiming they would be a security threat. NATO and the United States insist that the shield would defend NATO territories against missiles from North Korea and Iran and would not be directed at Russia.

Russian President Dmitry Medvedev has proposed drawing up a pan-European security pact instead of the shield, although Western nations and NATO are extremely reluctant to support the plans.

The NATO secretary general is also expected to discuss with the Russian authorities cooperation on Afghanistan, such as the transit of NATO military cargo to the war-torn country via Russia, possible supplies of Russian Mi-17 Hip transport helicopters to Afghanistan, and joint drug-fighting efforts.