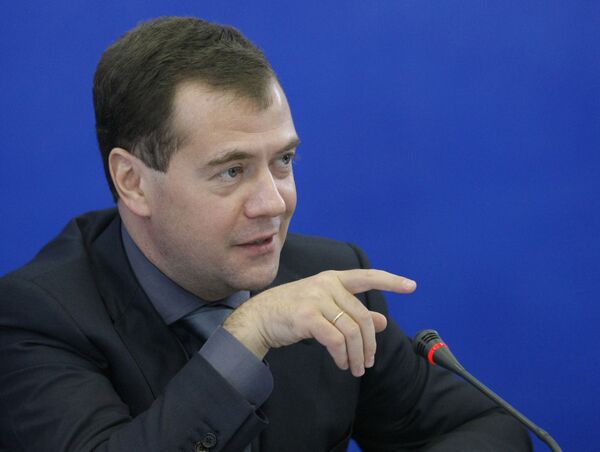 © RIA Novosti . Vladimir Rodionov
/
Go to the photo bank
Subscribe
Russian President Dmitry Medvedev will work to ensure that NATO takes Russia's views into account and to strengthen trust between Russia and the alliance at its summit next month, a Kremlin source said on Thursday.

Russian President Dmitry Medvedev will work to ensure that NATO takes Russia's views into account and to strengthen trust between Russia and the alliance at its summit next month, a Kremlin source said on Thursday.

The source said the goal is to create stronger trust to solve problems that have held back Russia-NATO cooperation.

"We are talking about equal cooperation, balanced and long-term cooperation that is dictated by state interests of Russia and NATO member countries," the source said.

He said that the attitude towards NATO remains highly skeptical due to the effects of the Cold War, but both sides are working to reduce the level of confrontation.

"We have learned and continue to learn to listen to each other," he said. "The main thing now is to learn to match strategic goals by determining of the really existing risks and hazards, responses to common threats," the source continued.

Medvedev announced last week he would attend the Russia-NATO Council summit, part of the NATO Lisbon Summit, on November 20.

Other topics will include "Euro-missile defense," the fight against international terrorism and sea piracy.

Western media reported earlier this month that NATO had invited Russia to attend the summit in Lisbon a bid to enhance cooperation on security issues, including Afghanistan and Iran.