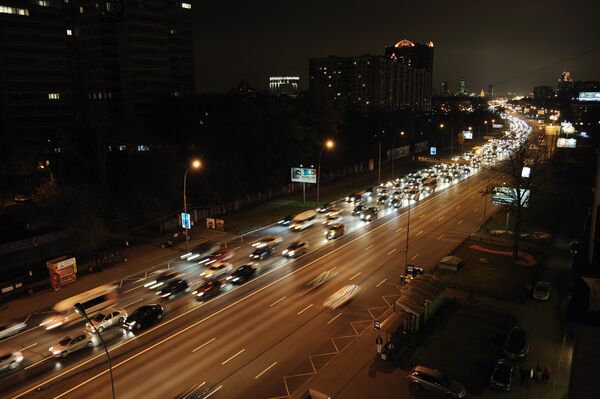 © RIA Novosti . Sergey Kirkach
Subscribe
The elimination of Moscow's notorious traffic jams is a "viability test" for the federal government and a key to making the capital a world financial hub, Russian President Dmitry Medvedev said on Thursday.

The elimination of Moscow's notorious traffic jams is a "viability test" for the federal government and a key to making the capital a world financial hub, Russian President Dmitry Medvedev said on Thursday.

"Our ability to solve this problem is not just a challenge for Sergei Sobyanin, who is the mayor, but for the whole country," Medvedev said. "This is a test of the authorities' viability."

Medvedev, who picked Sobyanin to replace Yury Luzhkov as Moscow's mayor last week, said he would personally oversee the effort.

"Although it is a regional problem, it needs to be dealt with by the federal government," he said. "It is a complex problem that needs to be tackled not just by the new mayor, not just by Sobyanin together with the [transport] minister or the Moscow region governor - everyone should become involved."

Moscow should also set an example to other Russian cities in dealing with traffic problems, the president said, adding that this applied even to cities with populations of less than 1 million.

A special coordination council headed by Transport Minister Igor Levitin will be set up to develop and improve road infrastructure in Moscow and the surrounding region.

The chronic lack of parking places in Moscow means drivers are often forced to park on the edges and sidewalks of the already busy downtown roads, adding to the traffic chaos. A new 1,410-place car park is being built next to the capital's Belorussky railway station, where the traffic problems are particularly bad.

In a speech prior to his inauguration, Sobyanin identified solving the city's transport problems as a key issue on his agenda.