Khodorkovsky to appeal any guilty verdict in Strasbourg - lawyer 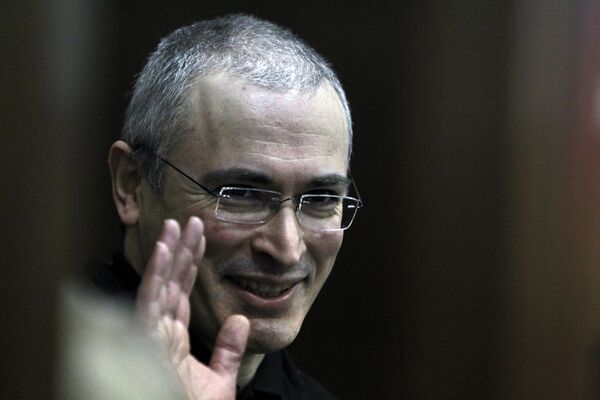 © RIA Novosti . Andrey Stenin
/
Go to the photo bank
Subscribe
Former Yukos CEO Mikhail Khodorkovsky will appeal to the European Court of Human Rights if he is found guilty in the ongoing second case against him and his partner, the businessmen's lawyer said on Thursday.

Former Yukos CEO Mikhail Khodorkovsky will appeal to the European Court of Human Rights if he is found guilty in the ongoing second case against him and his partner, the businessmen's lawyer said on Thursday.

A verdict in the case is expected soon. Last week, prosecutors demanded a 14-year sentence for Khodorkovsky and business partner Platon Lebedev on charges of stealing 218 million tons of oil from a Yukos subsidiary between 1998 and 2003. The prosecution initially said 350 million tons were stolen but reduced the figure late in the trial.

"In the course of the court process there have already been violations of the European Convention on Human Rights, and in a case of the conviction, we will have every reason to raise the issue of a breach of Article 6 [the right to a fair trial] in the Strasbourg court," Yelena Liptser said.

She said Judge Victor Danilkin had breached the rights of the defendants throughout the 19-month trial. The court refused to hear testimony from witnesses and experts suggested by the defense, Liptser added.

Khodorkovsky and Lebedev, who are already serving the eight-year sentences for fraud and tax evasion convictions, could be hit with a third criminal case, another lawyer for the businessmen said on Thursday.

"We suspect that today, as during the first case, there is a parallel criminal case being investigated," Karina Moskalenko said. "The investigation, or better to say fabrication, does not stop for a minute."

The suspicion that a new case could be filed came after high-profile officials accused Khodorkovsky of "bloody actions," Moskalenko said, adding that the prosecution always mentioned Khodorkovsky's name while launching new cases against former Yukos workers.

Investigators did not immediately respond to RIA Novosti requests for comment.