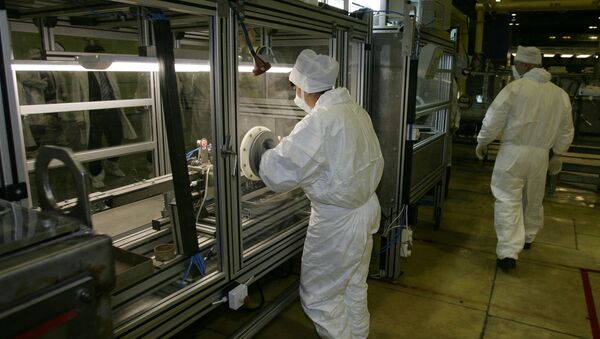 © Sputnik / Sergei Subbotin
/
Go to the photo bank
Subscribe
Russian fuel company TVEL and Ukrainian state concern Nuclear Fuel on Wednesday signed an agreement in Kiev on the construction of a nuclear fuel plant in Ukraine.

Russian fuel company TVEL and Ukrainian state concern Nuclear Fuel on Wednesday signed an agreement in Kiev on the construction of a nuclear fuel plant in Ukraine.

The agreement was signed during a committee meeting on economic cooperation of the Russian-Ukrainian intergovernmental commission.

"This is very important for us because it is a great step to the closed nuclear fuel cycle in our country," Ukrainian Fuel and Energy Minister Yuri Boyko said. "We have 15 nuclear reactors, and we should have our own nuclear fuel."

Ukraine's cabinet on September 22 approved TVEL as the winner of the tender to build a nuclear fuel plant in the country. The plant is to come online in 2014.

The deal would also help to determine the period during which Russia would supply nuclear fuel to Ukraine under the previously agreed contract.

The two neighbors signed a long-term deal to supply nuclear fuel to Ukraine this summer. The agreement contained a clause which directly linked the contract period with the results of the nuclear fuel plant construction tender.

"After the Ukrainian government decided on September 22 that TVEL won the contract to build a nuclear fuel production plant, the term of validity of the nuclear fuel supply contract was extended to the whole period while Russian-made reactors are operational in Ukraine, with an option to be renewed," said Alexander Lokshin, deputy head of Russia's state-run nuclear power corporation Rosatom.

Earlier the head of the Russian state nuclear corporation Rosatom, Sergei Kiriyenko, said the prospects of integrating the Russian and Ukrainian nuclear power industries are real.

Moscow and Kiev intend to establish a Russia-based joint venture on uranium enrichment, similar to the one established by Russia and Kazakhstan in Angarsk in East Siberia, Kiriyenko said.

A delegation of Russian ministers led by Prime Minister Vladimir Putin paid a visit to Ukraine on Wednesday to discuss a wide range of bilateral issues that included energy cooperation with Ukrainian top officials.