Nagorno-Karabakh deserves more attention from US and EU 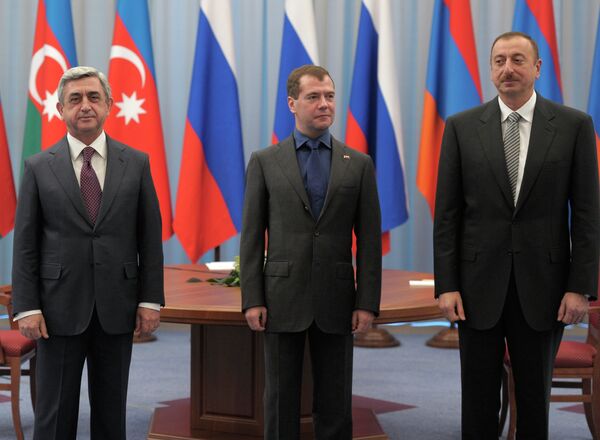 © RIA Novosti . Sergey Guneev
/
Go to the photo bank
Subscribe
The presidents of Russia, Armenia and Azerbaijan will meet on October 27 to discuss the unresolved conflict in Nagorno-Karabakh, an enclave inside Azerbaijan with an ethnic Armenian majority. Russia has long acted as the principal mediator in the dispute.

The presidents of Russia, Armenia and Azerbaijan will meet on October 27 to discuss the unresolved conflict in Nagorno-Karabakh, an enclave inside Azerbaijan with an ethnic Armenian majority. Russia has long acted as the principal mediator in the dispute. When will the deadlock be broken? What role is played by outside parties, mainly the United States the EU? What are their interests in the conflict? Alexei Vlasov, editor in chief of Vestnik Kavkaza, a news and analysis website devoted to the Caucasus, shares his views with RIA Novosti’s Samir Shakhbaz.

There is a lot of pessimism about the prospects for a settlement of the Nagorno-Karabakh conflict. Are you also pessimistic?

There is certainly cause for pessimism. But the fact that the presidents of Armenia and Azerbaijan will be meeting for the third time in one year, with Russian President Dmitry Medvedev mediating, suggests that a compromise is possible. Even if it is not reached at the two upcoming meetings – the one in Astrakhan or at the December OSCE summit in Astana – these events will probably lay the foundation for reaching agreements in 2011. The Karabakh issue has to be resolved sooner or later.

Have the sides made any other tangible progress, apart from these meetings between the three presidents?

The most positive change is that Armenia and Azerbaijan have articulated their positions clearly, and in doing so highlighted the existing tension points. This is a very important step; they have created an agenda, which allows mediators to start working on the two main problems. On the one hand, Azerbaijan is opposed to signing any documents stipulating that they will not use military force against Nagorno-Karabakh; Armenia, in turn, is reluctant to set any timeframe, even a very tentative one, for the liberation of at least those areas classified as adjacent territories, which were never part of Nagorno-Karabakh. I believe these two issues will be the focus of negotiations for the next six months, as both Armenia and Azerbaijan agree that the breakaway region’s status should be determined through a referendum in accordance with the Madrid Principles, and that it should not be delayed.

But do you think the Astana summit will produce any constructive decisions? If it doesn’t, what steps should be taken?

Regarding the summit, let me be clear that I do not expect that any concrete decisions will be made or any documents will be signed. The best they can do is adopt a general declaration stating that they are willing to negotiate a peaceful settlement of the conflict. The South Caucasus mission of Kazakhstan’s Secretary of State and Foreign Minister Kanat Saudabayev was not very successful. So what alternative do we have if the conflict is not resolved soon? Another war? No one wants war. Regardless of the statements they make to the media, neither Moscow, Brussels, Azerbaijan or Armenia wants to fight, although Azerbaijan’s military budget has reached 3 billion, while Armenia’s stands at 400 million. They are engaged in a small-scale arms race, which, considering the region’s strategic location close to the Caspian Sea, should raise concerns in Russia and Europe, but also in the United States, which has commercial interests in the region. Admittedly, no one wants to fight, but no one wants to pressure Azerbaijan and Armenia either. The mediators want to maintain balance and avoid acting, as they may be seen as partial to one side. What options are there? I believe Russia has struck the right note. Russia is providing consistent support for the negotiations and trying to come up with different ways to resolve the dispute. For example, public diplomacy or the gradual return of refugees – in other words, anything that could move the process past this deadlock. I don’t see any other options. The recent protocols signed by Armenia and Turkey has shown that Hillary Clinton and Sergei Lavrov can exert pressure, but ultimately the public will have the final say. And the public does not see any possibility for an open, honest and transparent reconciliation at this point, but let’s hope it will some day.

Absolutely. The United States has taken a timeout. Its motives have to do more with the Iranian problem rather than the Karabakh conflict. America’s current priority is to have a clear understanding with its potential partners in case decisions are made about Iran, possibly even on the use of military force. That is why the Nagorno-Karabakh issue has been, in a sense, pushed to the background. Clinton has not made any specific proposals, just general declarations. You are certainly right about Iran’s growing role in Armenia, which Iran views as an important partner. Turkey is beginning to play a similar role in Azerbaijan. However, I don’t think negotiations will be successful without Russian participation. Moscow has been the core of the negotiating process since the Meiendorf Declaration was signed. Turkey and Iran can play as large or small a role as they want in the process. Although Turkey shares Russia’s position, neither Turkey nor Iran is able to independently propose a roadmap for resolving the Karabakh conflict without Russia’s involvement.

So it is fair to say that no settlement in Nagorno-Karabakh will be possible until the United States resolves its problems with Iran?

This is only one of the factors affecting the prospects for a settlement. There are many others. The United States would be perfectly satisfied with the conflict remaining in a stalemate at this point, like the “no war, no peace” formula Trotsky proposed to Germany in 1918. But if President Obama is defeated in the next presidential elections, which is possible, a new Republican administration will have to deal with a host of hot spots in the former Soviet Union and the Middle East. In other words, Iran is not the only important factor here, and domestic issues in the United States, for example, also play a role here, as they affect the country’s foreign policy. Brussels, unlike Washington, wants to help make progress in the Nagorno-Karabakh peace process, because Europe has felt for a long time now that it needs to demonstrate that the EU’s policies, political tools and principles for conflict resolution can be successfully applied in post-Soviet republics. It has not had much success in Transnistria, Abkhazia or South Ossetia. That is why they are determined to make a concerted effort in Nagorno-Karabakh.

Thank you for sharing your thoughts with us.