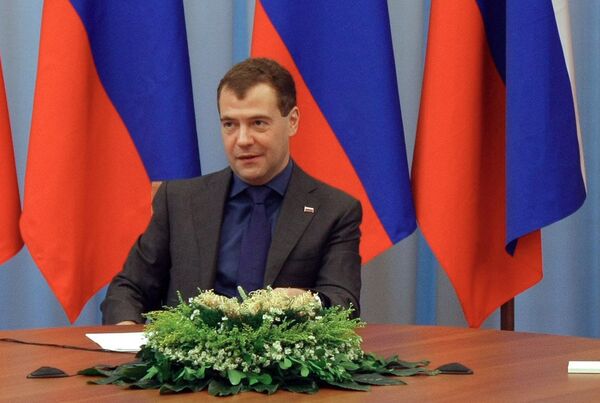 © RIA Novosti . Vladimir Rodionov
Subscribe
The presidents of Azerbaijan and Armenia agreed on Wednesday to swap prisoners of war and exchange the bodies of soldiers killed in clashes, Russian President Dmitry Medvedev said after a meeting with Ilham Aliyev and Serzh Sargsyan.

The presidents of Azerbaijan and Armenia agreed on Wednesday to swap prisoners of war and exchange the bodies of soldiers killed in clashes, Russian President Dmitry Medvedev said after a meeting with Ilham Aliyev and Serzh Sargsyan.

"The sides have just agreed a joint statement of a humanitarian nature, which is very important taking into account various difficulties in the Armenia-Azerbaijan relations on Nagorny Karabakh issues," Medvedev told journalists.

He also said the two countries could reach a basic agreement on the settlement principles by the time the Organization for Security and Cooperation in Europe summit convenes in early December.

Relations between Armenia and Azerbaijan are strained over Nagorny Karabakh, a predominantly ethnic Armenian region. The conflict first erupted in 1988, when the region claimed independence from Azerbaijan to join Armenia.

In May, the Karabakh region elected a 33-seat parliament with a voter turnout of almost 68%. Azerbaijani officials called the elections "illegal," saying they could seriously harm peace efforts.

The OSCE Minsk Group, comprising the United States, Russia and France, was created in 1992 to encourage a peaceful, negotiated resolution to the conflict between Azerbaijan and Armenia over Nagorny Karabakh.