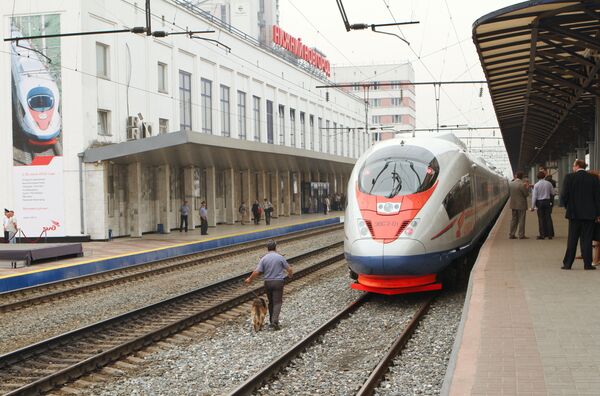 © RIA Novosti . Oleg Zoloto
/
Go to the photo bank
Subscribe
A Moscow court on Monday ruled that rail monopoly Russian Railways must pay over 178,000 rubles ($5,880) to the parents of a teenager killed by a high-speed Sapsan train six months ago.

A Moscow court on Monday ruled that rail monopoly Russian Railways must pay over 178,000 rubles ($5,880) to the parents of a teenager killed by a high-speed Sapsan train six months ago.

Alexei Bogdanov, 15, was hit by a Sapsan in April when crossing the rails at a crossing in northwest Russia's Leningrad Region. His parents filed a lawsuit demanding 40 million rubles ($1.3 mln) from Russian Railways saying there were no proper audio or light signals notifying people of an approaching train.

"Safe conditions were not created for people crossing the rails," the parents said in the lawsuit.

But Russian Railways said the boy died due to his own carelessness, and said the amount of compensation was too large.

"The light and sound alarm worked properly, the train was signaling. The railway crossing is equipped in line with security provision norms," the company said.

Igor Trunov, the parents' lawyer, said: "We intend to appeal the court ruling as the awarded amount is less than what we demanded."

According to official data, since its startup, the Sapsan has killed at least seven people. Unofficial reports say the train has claimed 60 lives.

The train has already become one of the most controversial transportation projects in Russia. Besides fatalities, it has caused social tensions among the local residents who are angry about the disappearance of cheap rail tickets.