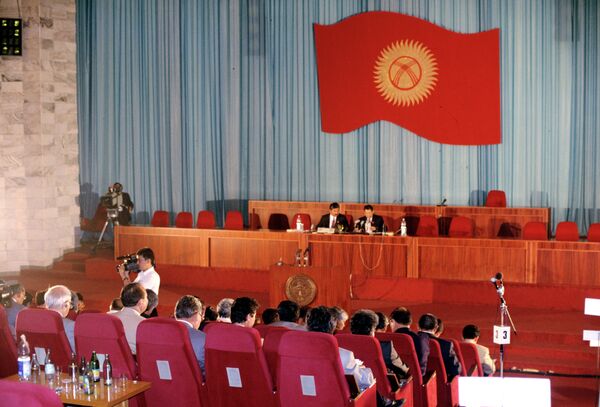 The leader of the Kyrgyz opposition party Ata-Zhurt, which won the parliamentary elections in Kyrgyzstan, has accused the secret services of being behind an attack on him, an allegation denied by the State National Security Service.

The leader of the Kyrgyz opposition party Ata-Zhurt, which won the parliamentary elections in Kyrgyzstan, accused on Saturday the secret services of being behind an attack on him, an allegation denied by the State National Security Service.

Kamchibek Tahiyev told a news conference on Saturday evening that he had been wounded in a shootout between security guards at his home on the outskirts of Bishkek and several men armed with assault rifles and pistols.

He said an identity card in the name of a State National Security Service major was found on one of the gunmen.

"I declare with confidence that they were members of the State National Security Service," Tashiyev said, adding that the person behind the attack "is the head of the intelligence service, Keneshbek Dushebayev."

Kyrgyz news agency 24.kg reported that the deputy head of the security service said it did have agents working near Tashiyev's house.

"They are checking information relating to drug trafficking, and their aim was not an attack on the house of Kamchibek Tashiyev," the agency quoted Kolbay Musayev as saying.

He said the reports of the shootout were puzzling. "As far as I know, the Prosecutor General's Office has opened a criminal case and is investigating," Musayev said.

Tashiyev, whose party led the October 10 parliamentary elections with 8.88 percent of the vote, said some political forces could be trying to have the election annulled.

"Do not rule out that this was an attempt to destabilize the situation," he said. "It is not the first attempt to remove me as a politician."

He added that he had informed President Roza Otunbayeva of the incident via her deputy. Earlier, he told RIa Novosti that the gunmen were trying to "kill or kidnap" him.

Tashiyev's Ata-Zhurt, or Fatherland, party was formed by officials from the government of ousted President Kurmanbek Bakiyev, in which he was emergency situations minister. Ata-Zhurt is opposed to the constitutional reforms that turned Kyrgyzstan into a parliamentary republic.

International observers said the October elections were the cleanest and most democratic in the history of the country. According to preliminary results, five parties received enough votes to win seats in parliament.

Once the official results are announced, a coalition government will have to be formed. Under the new constitution, it will acquire many of the powers that now lie with the president. It is not clear whether Ata-Zhurt will be part of any coalition government, which will require at least three parties to secure a parliamentary majority.