Russia's global financial center will be built on rubles 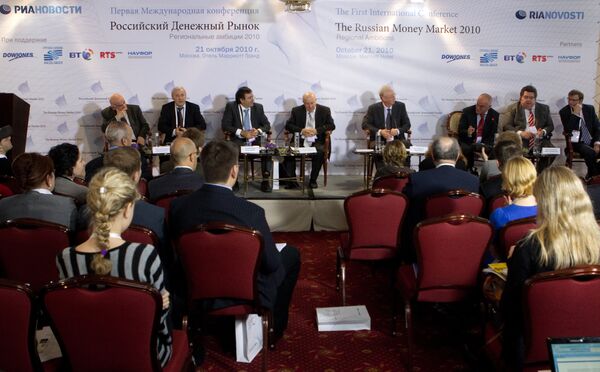 © RIA Novosti . Mikhail Fomichev
/
Go to the photo bank
Subscribe
If Russia wants to become a global financial center and make the ruble a reserve currency, it will have to do more than keep inflation low, ensure political stability and protect private property. This is the conclusion reached by government officials and leading economists at the conference, "The Russian Money Market in 2010: Regional Ambitions," organized by RIA Novosti.

If Russia wants to become a global financial center and make the ruble a reserve currency, it will have to do more than keep inflation low, ensure political stability and protect private property. This is the conclusion reached by government officials and leading economists at the conference, "The Russian Money Market in 2010: Regional Ambitions," organized by RIA Novosti.

Two years ago, President Dmitry Medvedev announced the goal of making Moscow an international financial center. But to achieve this, the Russian ruble must first become a freely convertible currency that is widely used in international transactions. Moscow would then become a stage for transactions with currency, credit, securities and precious metals. This, in turn, would attract banks and other financial institutions to Moscow.

Today, there are two major global financial centers - London and New York. Other cities have failed to reach these heights for a variety of reasons. Moscow currently ranks 68 of 75 on the list of international financial centers. Clearly it has a long way to go before it can claim the status of even a regional financial center, and Russia has to meet a series of challenges in the interim.

First, the ruble must become a freely convertible currency that is widely used in transactions on the global market. Arkady Dvorkovich, an aide to President Medvedev, said at the conference that the Russian ruble is currently used in transactions with China, Ukraine and Kazakhstan. Russia can expect to add more countries to this list, primarily its closest neighbors. If Russia wants to trade in rubles with other, more distant foreign countries, it must use its competitive advantage - its abundance of commodities. Currently, contract prices are determined based on the dollar price of a barrel of oil. If pricing on foreign markets were to be done in rubles, Russia's currency would assume a more important role.

Sergei Guriyev, president of Russia's New Economic School, believes the ruble has the potential to become a reserve currency, but it must contend with two main competitors, the Canadian and Australian dollars.

The privatization program approved by the government on Wednesday, which will be signed by the president in the next few days, may also help raise the profile of the ruble. "The flow of capital into the country will have a positive influence on the status of the ruble," Dvorkovich said.

If Russia wants the ruble to be a currency that is in demand, it must make its exchange rate less dependent on political factors, Guriyev noted. If investors sense political risks, they will opt to do business in other currencies.

Yevgeny Yasin, president of the State University-Higher School of Economics, said that the government must end its long-standing confrontation with the business community. Otherwise Russia has no chance of becoming a global financial center. Yasin said that Russia must also guarantee the supremacy of law and the inviolability of private property and transition from a democracy with authoritarian tendencies to a classical democracy, as understood by the rest of the world.

Russia must do more to protect the rights of investors. The country currently ranks 120 out of 183 countries on the World Bank's Ease of Doing Business Index, and is significantly trailing other countries with aspirations of becoming global financial centers.

Low inflation is also essential for the ruble to raise its profile. According to various estimates, inflation in 2010 will reach 8%-9% by the year end, and the Finance Ministry predicts 6.5% inflation for next year. Inflation must be kept in check.

Apart from economic and political problems, Moscow needs to address some more mundane issues. Employees in the service sector should know at least one foreign language. The educational system should produce specialists that a global financial center requires. Law and order needs to be established in the housing market, and the transportation system is in need of drastic improvements.