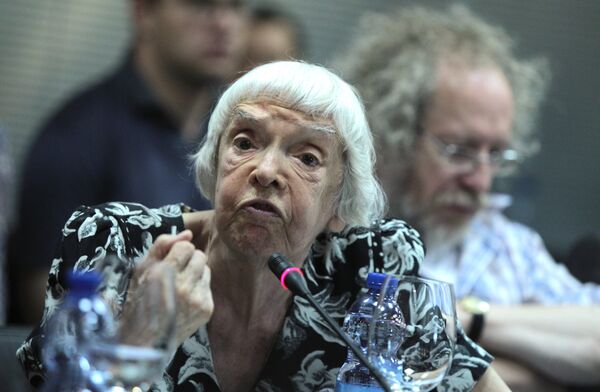 © RIA Novosti
/
Go to the photo bank
Subscribe
The Russian opposition has insisted the Moscow government allow 1,500 activists to gather for a rally in downtown Moscow instead of the proposed 200.

The Russian opposition has insisted the Moscow government allow 1,500 activists to gather for a rally in downtown Moscow instead of the proposed 200.

Earlier this week, opposition protesters were given the go-ahead to hold a meeting on Triumfalnaya Square for the first time. Many observers said the move was as a result of the sacking of long-standing Moscow mayor Yury Luzhkov.

Although the Moscow government allowed only 200 people to rally on Triumfalnaya Square, instead of the requested 1,500, opposition leaders Eduard Limonov and Ludmilla Alexeeva, who organize the protests on the square, described the decision as a "victory."

However, on Friday the Moscow government said it had received a letter from the opposition in which they demanded the authorities meet their initial request to allow 1,500 people to participate in the rally. In the letter, described by Moscow authorities as "provocation," the opposition also urged the government to let them stage the meeting in the square's center, instead of a proposed location nearby.

Opposition protestors attempt to hold rallies on Triumfalnaya Square on the last day of every month that has 31 days in honor of Article 31 of the Russian Constitution, which guarantees freedom of assembly. Luzhkov, who was sacked last month after 18 years in office, was a staunch opponent of the protests.

In the letter sent to the Moscow Mayor's Office, the rally organizers reportedly demanded the demolition of the fence and the end of construction on the square, which the Moscow government described as "interference into the competence of the Mayor's Office."

The Moscow government said it had proposed Alexeeva, the head of the Moscow Helsinki Group, two options: to hold a meeting involving 200 people on Triumfalnaya Square or to move to another two downtown locations, Bolotnaya Square or Taras Shevchenko Embankment, with 1,500 opposition supporters.

Alexeeva should make the final decision by Monday, the Mayor's Office said.

Most of the unsanctioned protests on Triumfalnaya Square have inevitably ended with mass arrests and have come to be regarded as a symbol of the Kremlin's intolerance of dissent.

The Moscow government has repeatedly proposed the opposition to hold its meetings in other locations in downtown Moscow, but the protesters have refused.

"The authorities offered the opposition a hand of friendship and were expecting that the situation around Triumfalnaya Square would be perceived normally. Instead of this, we are observing an absolutely inadequate reaction," he said.