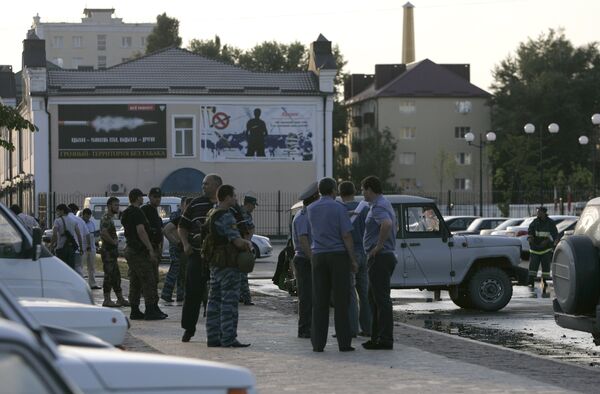 © RIA Novosti . Said Tsarnaev
/
Go to the photo bank
Subscribe
Police in Russia’s Chechnya have killed all the terrorists who attacked the republic’s parliament on Tuesday morning, an Interior Ministry official said

Police in Russia’s Chechnya have killed all the terrorists who attacked the republic’s parliament on Tuesday morning, an Interior Ministry official said

The deputy head of the republic’s Interior Ministry, Roman Edilov, said four militants and two police officers had died during the operation.

He also dismissed reports that the militants had taken hostages.

He added that a suicide bomber had blown himself up while the other militants headed toward parliament.

Parliament was evacuated and a special operation, headed by Chechen leader Ramzan Kadyrov, was launched to flush out the militants.

This is the second serious terrorist incident in Chechnya in recent months. In August, a suicide squad launched a massive attack on Kadyrov’s home village of Tsentroi.

Chechnya, which saw two brutal separatist wars in the 1990s and early 2000s, has seen relative calm in recent years under Kadyrov, a former militant turned Kremlin ally whom critics have accused of human rights abuses.