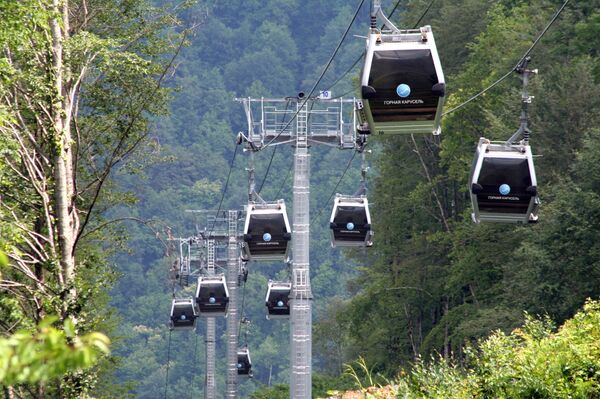 The 5.7-kilometer (3.54-mile) tramway runs to the 9th century Monastery of Tatev, a UNESCO World Heritage candidate, some 280 kilometers (174 miles) away from Yerevan.

Armenian President Serzh Sargsyan, Catholicos Karekin II and six children from neighboring villages became first passengers of the tramway, which is a part of the Tatev Revival project worth $45-million.

Russian businessman Ruben Vardanyan, who was born in Armenia, donated some $28 million for the project.

"We did not mean to take anyone by surprise by building this tramway," Sargsyan said after the ride.

The monastery, which has played an important role in the history of the region, being its major spiritual, political, cultural and educational center, was seriously damaged during an earthquake in 1931 and is now being reconstructed.

Visitors will have to spend just 11 minutes in the tramway cabin to reach a promontory located more than 100 meters above the Vorotan River, on which the monastery is situated. The ropeway will run with the maximum speed of 37 km/h (23 mph) and will be officially launched on October 23.

Previously, a 4-kilometer-long (2.48-mile-long) Sandia Peak Tramway in the United States' Santa Fe was the longest in the world.

Armenian authorities said that they will apply to the Guinness Book of World Records to officially acknowledge that the tramway as the world's longest.