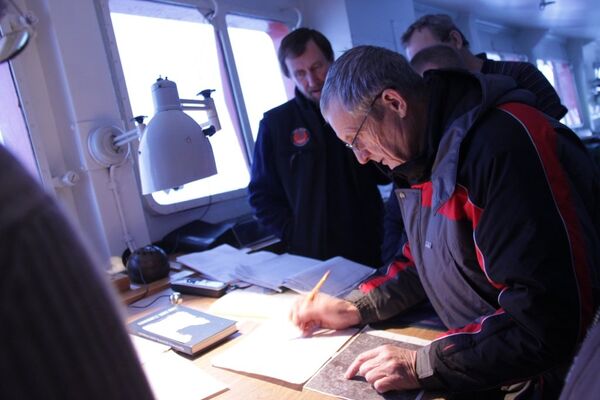 In the bitterly cold darkness more than a thousand kilometers above the Arctic Circle, a team of Russian scientists have inaugurated a floating research station that will be home to 15 researchers for up to a year.

In the bitterly cold darkness more than a thousand kilometers above the Arctic Circle, a team of Russian scientists on Friday inaugurated a floating research station that will be home to 15 researchers for up to a year.

Strong winds blew snow across the ice as the Russian flag was raised above the Severny Polyus-38 base and the national anthem rung out across the ice floe in the Chukchi Sea.

The ceremony was illuminated by the Rossiya nuclear icebreaker about half a kilometer away, and culminated in a fireworks display.

The flag was raised by the senior permanent member of the expedition, Tomash Petrovsky, and its youngest members, cook Dmitry Mitkovets and oceanologist Andrei Balakin. Suddenly, one of the participants pulled out his accordion and started to play popular Russian folk songs, with half a dozen voices chiming in.

Petrovsky said he had not seen a better ice floe in years. It was located on October 10 and meets all the basic requirements for the drifting station.

The head of the expedition, Artur Chilingarov, immediately sent separate telegrams to President Dmitry Medvedev and Prime Minister Vladimir Putin. Within a half hour, Putin called the station and congratulated Chilingarov and the other members on opening the research station.

"The opening of this station supports Russia's priorities in the Arctic," Chilingarov said during his radio conversation with Putin. He also said that 75% of the participants in the expedition are under 30 years old. He emphasized that the involvement of a new generation of scientists and researchers "is very good."

The meteorological station is now operating at SP-38 and has given its first information, which means the station has officially begun its work.

"This is the first time in my life that a station was equipped so fast," Chilingarov said in congratulating the crew of the expedition with the opening of the fully-equipped station.

Chilingarov wished the expedition “firm ice,” as is the custom among polar researchers.

Chilingarov, Petrovsky and other members of the expedition spoke from a huge sledge, which served as a rostrum, during the opening ceremonies.

Two dogs also participated in the opening as the researchers were worried that a polar bear could appear on the ice floe.

"No polar bears participated in the ceremonies," Chilingarov said.

The Rossiya will leave the ice floe later on Friday and set course for Murmansk, where it will arrive in no less than a week.

The 15-member expedition will not only continue polar studies but also gather more scientific evidence to reinforce Russia’s claims to the Arctic, which it regards as a "strategic economic asset." It is hoped that the ice will allow the research station to operate for a year.

The ice floe is located in the Chukchi Sea about 600 km north of Wrangel Island, at 76.05°N 175.34°W and is 7 km by 12 km. The ice is at least three years old and 2-2.5 meters thick. Its location and drifting pattern at about 0.2 knots suggest the station will be operable at least through August or September of next year.

ON BOARD THE ROSSIYA IN THE CHUKCHI SEA, October 15 (RIA Novosti, Alexander Stelliferovsky)