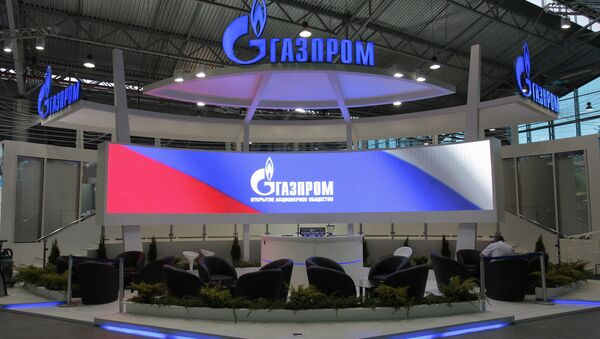 © Sputnik / Alexey Danichev
/
Go to the photo bank
Subscribe
Russia's gas giant Gazprom slammed European Union initiatives to reform its gas industry saying on Thursday that they pose a risk of underinvestment in Europe's infrastructure and cause Gazprom problems in operational activities and threaten its property rights.

Russia's gas giant Gazprom slammed European Union initiatives to reform its gas industry saying on Thursday that they pose a risk of underinvestment in Europe's infrastructure and cause Gazprom problems in operational activities and threaten its property rights.

The EU is trying to reform its energy market to guarantee security of supply, competitiveness and environmental safety by breaking down production and transmission. In Russia, Gazprom mines, pumps and sells gas.

Gazprom Deputy Board Chairman Alexander Medvedev said in an interview published on Gazprom's official web site that even if the company evaded direct obligations to sell transmission assets in some countries, the EU initiatives still deprived it of access to managing the assets, devaluating the investment it made.

"In the late 1990s ... Gazprom Group found an opportunity to build the Yamal-Europe gas transit pipeline across Poland used to supply gas to Germany. Now we see an emerging threat that the asset meant for reliable gas supply to our customers will be transferred to an independent operating company that will start acting on its own account. Thus, the pipeline owner turns into a financial donor obliged to execute investment decisions taken by an independent system operator!" Medvedev, also head of Gazprom Export, Gazprom's export arm, said.

Medvedev said the EU initiatives forced Gazprom to change its operational routine to adjust to new rules under which customers have the right to change their nominations once, on the day before supply instead of several times a day. Gazprom now maintains backup transmission capacities to meet the quickly changing demand but under the new rules this is unfair competition, he said.

Medvedev also criticized EU plans to switch to a spot market mechanism of gas supplies from long-term contracts favored by Gazprom saying the new mechanism would lead to higher prices.

"Without long-term price contracts the volume of gas coming to the market starts depending on the price appeal. The gas will be available when the price is high. If the price is low, volumes may outflow to more attractive markets or stored until better times. Hence, the reliability of European gas supply will be determined by the competition with other global gas markets, primarily, with Asian ones," Medvedev said.

He said there were also risks for the development of gas transmission and storage capacities which required heavy investment with a long payback period unattractive to anyone but gas companies.

"However, these very companies will not be allowed to take part in such work...Having no opportunity either to get a reasonable income while the gas pipeline is operating or to take part in its operation, suppliers will not wish to make such significant investments, they will start searching for more attractive markets and projects. Thus, the ongoing reform brings a real risk of investment shortfall in the European gas industry - with all the consequences that come with it," he said.

Medvedev said Gazprom was ready to help the EU work out a compromise that would suit everyone.

"We in Gazprom are confident that compromise decisions can still be worked out in cooperation with major gas suppliers from third party countries. We are working towards resolving this issue," he said. "I also hope that we will be granted the opportunity to make a significant contribution to updating the (reform) document."