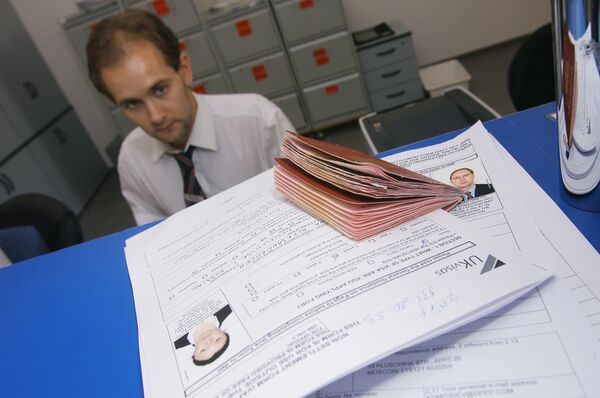 © RIA Novosti . Iliya Pitalev
/
Go to the photo bank
Subscribe
Russia may seek to ease visa regime with certain European countries if no progress is made in scrapping visa requirements for Russians, a foreign ministry representative in South Russia said.

Russia may seek to ease visa regime with certain European countries if no progress is made in scrapping visa requirements for Russians, a foreign ministry representative in South Russia said.

The introduction of visa-free travel with the EU has become a major foreign policy goal in Moscow's relations with Brussels.

"There are still some states that are reluctant to see Russia in the Schengen zone," Boris Gokzhayev, a foreign ministry representative in Rostov-on-Don, said.

"We may reach a compromise decision with these states (who oppose visa-free travel with Russia) to keep their visa requirements in place, but to introduce some kind of eased entry procedure for the countries willing to do so," he said.

The official added that the decision may be made by the end of this year. The next Russia-EU summit is due in Brussels this December.

Russia submitted a draft agreement on scrapping visa requirements to the European Union at the Russia-EU summit in the southern city of Rostov-on-Don on May 31.

Prime Minister Vladimir Putin said on the same day that "the majority of our partners in Europe support this idea," but several EU states reject it, mainly for political reasons.

In July, President Dmitry Medvedev discussed the adoption of a visa-free regime between Russia and the EU with Italian Prime Minister Silvio Berlusconi. Berlusconi said there was certain resistance to a visa-free regime, especially from some Eastern European countries.

Russian Foreign Minister Sergeu Lavrov said in late September the mutual scrapping of visa requirements between Russia and the EU would have a "transformative" effect on the entire European and Euro-Atlantic political relationship.

A total of 30 countries, including all EU members and three non-EU states (Iceland, Norway, and Switzerland) are signatories to the Schengen agreement. However, only 15 countries (Austria, Germany, Belgium, Denmark, Finland, France, Greece, Iceland, Italy, Luxemburg, Norway, Portugal, Spain, Sweden, The Netherlands) have implemented the common border control and visa provisions.