Medvedev advises to wait with construction of St. Petersburg skyscraper 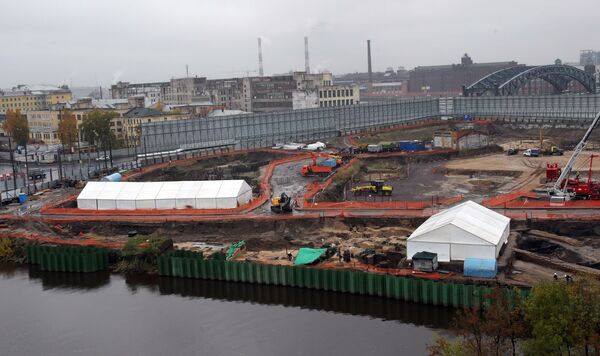 Russia's president said a decision on the construction of a 403-meter skyscraper in historic St. Petersburg's city center must be made only after all court procedures and consultations with UNESCO are completed.

Russia's president said a decision on the construction of a 403-meter skyscraper in historic St. Petersburg's city center must be made only after all court procedures and consultations with UNESCO are completed.

Local residents and public activists are outraged by the plans of the Russian energy giant Gazprom to build the Okhta Business Center. Downtown St. Petersburg is a UNESCO world heritage site and many believe the construction will distort the city's low skyline.

"I know that opinions on this subject differ in St. Petersburg, but most of the people are not impartial and are very concerned. I will also say that I have been receiving letters that speak in favor of this project and consider it interesting," Dmitry Medvedev said at a meeting with Russian rock musicians on Monday.

The president said that as he has lived most of his life in St. Petersburg and he is very concerned with the architectural image of the city.

"Appearance of new development centers, architectural dominance is very important for St. Petersburg. But must we do it near Smolny? This is a very important question. I can propose at least a dozen other places which could be enriched by this tower," the president said.

Opponents of the construction say local authorities are turning a blind eye to the city's planning restrictions for buildings over 100 meters tall and dismissing Russia's commitment to the UNESCO World Heritage Convention.

In August, St. Petersburg City Court upheld the ruling of a district court giving the green light for the construction of the skyscraper in the city's historic city center.