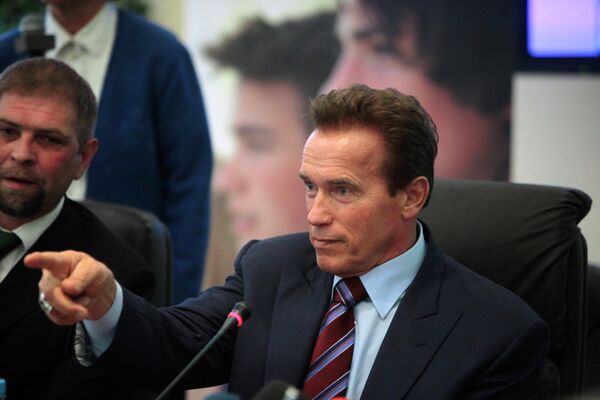 Traffic in Moscow is the city's worst ecological problem, that's why Moscow's new mayor should meet this challenge first of all, California Governor Arnold Schwarzenegger said on Tuesday.

"Moscow's main challenge is the same as in Los Angeles, Beijing, Johannesburg, Cape Town, and all big cities - traffic...But I am absolutely confident that when I come to Moscow next time there will be no traffic jams at all," Schwarzenegger said during a meeting with students from the Higher School of Economics in Moscow.

Ecology and renewable energy is the main theme he is going to pursue after the end of his term as governor in January 2011, Schwarzenegger said, adding that he was also mulling over Russian President Dmitry Medvedev's proposal to become Moscow's mayor.

"We have many different events here. You arrived at the moment when Moscow has no mayor," the Russian president told the American guest on Monday, adding with a smile: "If you were a Russian citizen, you could work for us."

Former Moscow mayor Yury Luzhkov was sacked by Medvedev on September 28 after weeks of speculation about his worsening relations with the Kremlin. The ruling United Russia party presented a list of four candidates for the post. However, the majority of Muscovites disapprove of them, according to a survey by the Superjob.ru portal.

"When I ran for governor, one of my main themes was that we have to protect the economy and the environment at the same time. So, it was very difficult for many people to understand... how we could combine these two," he said. "We proved that we can do both."

California, as the most populated U.S. state and the home of Silicon Valley, is one of the country's largest users of energy and producers of greenhouse gases. The state roughly produces 1.4 percent of the world's greenhouse gases. Schwarzenegger's 2005 executive order on climate change kicked into high gear to further advance clean renewable energy and other solutions to lower the state's greenhouse gas emissions.

The California governor is currently leading a delegation of high-tech executives and venture businessmen to Russia to discuss investment opportunities in the country's high-tech sector, especially in the nascent Skolkovo research hub near Moscow, dubbed the Russian Silicon Valley.