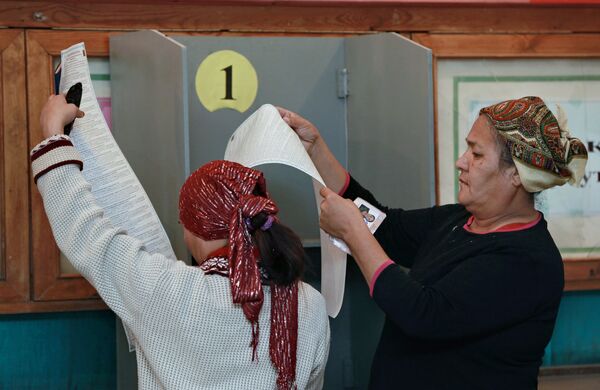 © RIA Novosti . Andrei Stenin
/
Go to the photo bank
Subscribe
The Kyrgyz parliamentary elections were marked by political pluralism and "constituted a further consolidation of the democratic process," international observers said in a preliminary statement issued on Monday.

The Kyrgyz parliamentary elections were marked by political pluralism and "constituted a further consolidation of the democratic process," international observers said in a preliminary statement issued on Monday.

"I was impressed by the political pluralism, the civic responsibility and the spirit of the people of this country," Morten Hoeglund, Special Coordinator of the short-term OSCE observer mission, said.

"This election reflected the will of the people of the Kyrgyz Republic," he added.

"The international community will take full account of this and expects the political parties to respect the results and form a stable government which can deliver a better future for Kyrgyzstan," Katarina Nevedalova, head of the European Parliament delegation, said.

Twenty-nine parties competed in the election for seats in Kyrgyzstan's 120-member parliament on Sunday. The parliament will see its powers increase as part of constitutional changes approved in late June in a national referendum that confirmed Roza Otunbayeva as interim president following the ouster of President Kurmanbek Bakiyev in April.

The nationalist Ata-Zhurt party is in the lead, and the Social Democratic Party is in second place.

It is hoped the elections will continue Kyrgyzstan's progress toward long-term stability after six months of political unrest and ethnic violence that saw former President Kurmanbek Bakiyev flee the country in April.