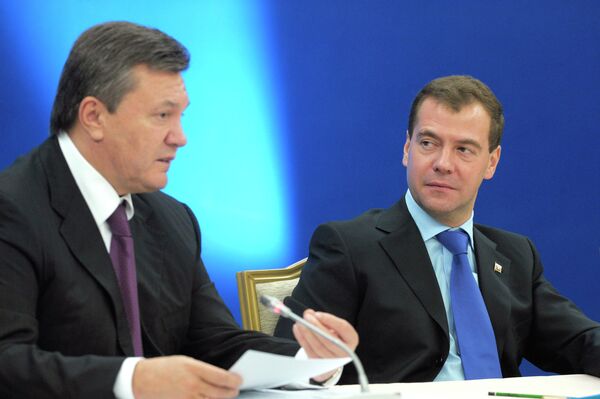 © RIA Novosti . Sergey Guneyev
/
Go to the photo bank
Subscribe
Russia will not "swallow up" the Ukrainian economy as a result of the blossoming relationship between Moscow and Kiev, Ukrainian President Viktor Yanukovych said.

Russia will not "swallow up" the Ukrainian economy as a result of the blossoming relationship between Moscow and Kiev, Ukrainian President Viktor Yanukovych said.

Relations between Russia and Ukraine, which sunk to post-Soviet lows in the past five years during the presidency of pro-western Viktor Yushchenko, have improved significantly since Yanukovych's election in February.

However, the Ukrainian opposition claims that the country's new leadership does not defend properly Ukraine's national interests in relations with Russia.

"Ukraine is integrated into the world's economy to such a degree that this [the strengthening of ties with Russia] has little impact [on the state of Ukrainian economy]. But we are watching closely and Russia realizes that," Yanukovych said in an interview with the Ukraina television on Friday night.

He added that his frequent meetings with the Russian leadership were necessary to restart the economic mechanism that had been idle for years.

"We have an obligation to 'jump start' the bilateral economic mechanism that has been partially destroyed...and, of course, both sides defend their national interests," the Ukrainian president said.

According to Yanukovych, Kiev and Moscow are both interested in the revival and development of infrastructure in many branches of the Ukrainian economy, as well as the steady growth of the Russian economy.

The new Ukrainian leadership has set the strategic aim of joining the EU, but says the country will continue developing closer ties with Russia.