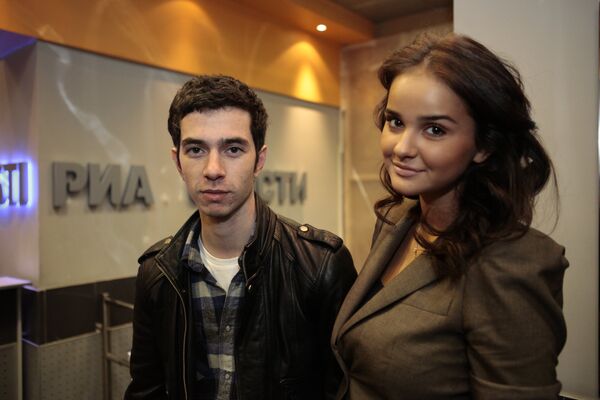 The 2011 birthday calendar featured 12 female journalism students posing in just their underwear. The message: "Vladimir Vladimirovich, We love you. Happy Birthday Mr Putin," was adorned, in English, on the cover and each picture was accompanied by a personal message to the prime minister. "You put out the forest fires, but I'm still burning," one message reads.

In response, another group of journalism students created their own calendar, in which they posed fully clothed with pieces of tape over their mouths to symbolize the restrictions on freedom of the press imposed by the Kremlin. The girls' personal messages mocked the vulgar messages of their fellow students by posing serious political questions about the policies of the current government.

The calendar has caused a huge stir in the international media, with news agencies and papers from all over the world quickly picking up on the story.

"We didn't foresee this media frenzy. We just wanted to congratulate our ex-president on his birthday and show him how much we respect him," Tabak says, while attempting to answer numerous calls on his cell phone and talk to swarms of journalists.

He says 50,000 copies of the calendar have already been sold and 50,000 more will go on sale soon. All proceeds will go towards helping a fellow student, who suffers from leukemia.

Tabak takes little heed of the criticism triggered by his campaign.

"We respect Vladimir Vladimirovich [Putin] and see nothing shameful in wishing him happy birthday," Tabak says.

Alisa Kharcheva, 17, who starred in the calendar as Miss April, says her parents lauded the project.

Neither Tabak nor Kharcheva feel threatened by the counter-project.

"What they've done isn't bad, but it's not very original," Kharcheva says. "No-one would have taken any notice of their calendar if ours hadn't been produced first," she says confidently.

"If they want to play political games, let them. Our goal was different," Tabak shrugs.

The young publisher admits that the models from his calendar face a difficult term.

"I've heard that the faculty heads are going look into the project," he says. "I hope they also take into consideration the fact that the girls are being called 'sluts'. I stand against double standards."

The premier, who turned 58 on October 7, was informed about the two birthday gifts, and approved both, Putin's press secretary Dmitry Peskov said, according to tabloid news site Life.ru.

"The premier was more impressed by the first [group of girls]," Peskov said.