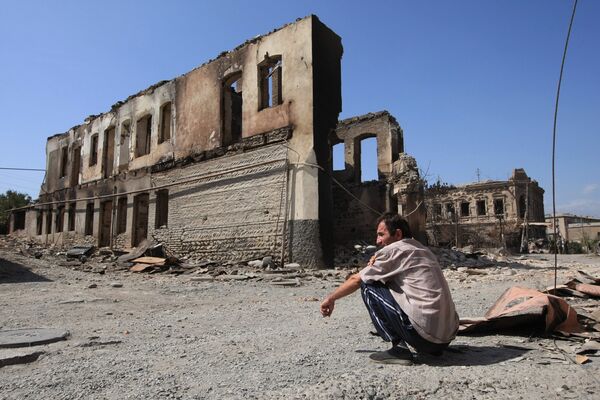 © RIA Novosti . Mikhail Fomichev
/
Go to the photo bank
Subscribe
Council of Europe's Commissioner for Human Rights called on Thursday for more access for international humanitarian missions to the areas affected by the 2008 Russia-Georgian conflict.

Council of Europe's Commissioner for Human Rights called on Thursday for more access for international humanitarian missions to the areas affected by the 2008 Russia-Georgian conflict.

"All sides should ensure a faster improvement of the human rights situation" in the region, Thomas Hammarberg said in a report.

He lauded the return to their homes of over 100,000 people displaced by the conflict. However, the majority of ethnic Georgians have not been able to come back, he said.

"Hardly any progress has been achieved with regard to returns of these displaced persons," the report said. "Access to food, water, sanitation and basic services should be adequately secured as well as durable housing solutions for tens of thousands of internally displaced persons."

Efforts should be made to release all remaining detainees apprehended while crossing the administrative boundary line since the end of the conflict, Hammarberg said.

While nearly all remnants of war have been removed from the affected areas, the removal should continue, he said, while also calling on Russia and Georgia to sign and ratify the Convention on Cluster Munitions, an international treaty prohibiting the use of cluster bombs that scatter sub-munitions over an area.

Russia and Georgia faced off in a five-day war in August 2008, when Tbilisi attempted to bring the breakaway republic of South Ossetia under central control.

The Georgian military effort was unsuccessful and shortly after ceasefire, the Kremlin recognized the independence of South Ossetia and another breakaway republic, Abkhazia.