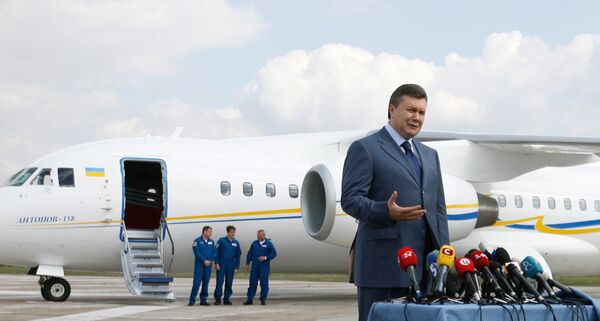 © RIA Novosti . Andrey Moiseyenko
/
Go to the photo bank
Subscribe
Ukrainian President Viktor Yanukovych will on Thursday start a two-day visit to France for talks with his French counterpart Nicolas Sarkozy and a meeting with business circles.

Ukrainian President Viktor Yanukovych will on Thursday start a two-day visit to France for talks with his French counterpart Nicolas Sarkozy and a meeting with business circles.

Yanukovych's administration has not yet made public the visit agenda, but the Ukrainian Foreign Ministry earlier said Kiev's plans for European integration will be the focus of the talks.

The new Ukrainian leadership has set the strategic aim of joining the EU and is trying to win the support of EU member states.

Ukraine's European integration policy faces three tasks: visa cancelation, creating a free trade zone and receiving an associate membership in the EU. Ukraine hopes to sign the Association Agreement, part of which is the free trade zone provision, by the end of 2010, but Brussels is less optimistic on the issue.

The EU and Ukraine in September agreed on joint work to modernize the gas transportation system. A July assessment by the country's Fuel and Energy Ministry put the cost of the reconstruction at $6.5 billion.

Yanukovych's visit takes place against the backdrop of constitutional amendments in Ukraine that expanded his powers.

Ukraine's Constitutional Court boosted presidential powers earlier this month by ruling that the 2004 reforms that were introduced during the Orange Revolution had been unconstitutional.