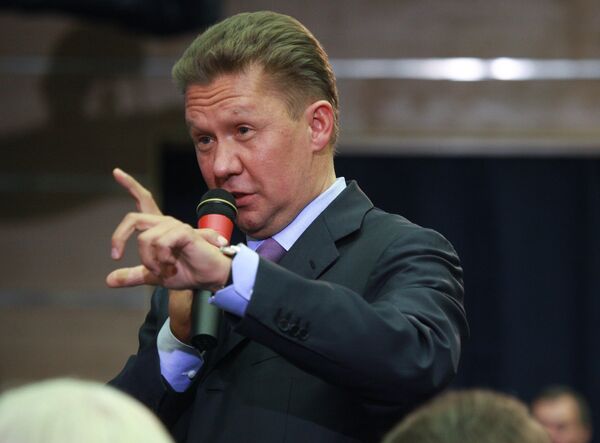 © RIA Novosti . Ekaterina Chesnokova
/
Go to the mediabank
Subscribe
International
India
Africa
Russia is not is not going to revise its gas contract with Belarus as there are no problems with the current agreement, Gazprom CEO Alexei Miller said on Wednesday.

Russia is not is not going to revise its gas contract with Belarus as there are no problems with the current agreement, Gazprom CEO Alexei Miller said on Wednesday.

"The Belarusian side is paying for gas in strict accordance with the terms set for 2010," Miller said. "Now, this issue [revision of the gas contract] is not a topic for discussion."

"If you talk about paying for deliveries in the coming months, we see absolutely no problem." Miller said, expressing the hope that the situation would not change before the end of the year.

Russian Ambassador to Belarus Alexander Surikov said at the start of September that there would be no "gas war" between the two countries this year. He admitted, however, that Belarus would like to pay less for gas in 2011.

Belarus has made no secret of its desire to negotiate a better price for Russian gas, looking enviously at the deal Ukraine received after President Viktor Yanukovych was elected in February. Yanukovych moved swiftly to improve ties with Moscow, and discounted gas prices were agreed when the two sides agreed to extend Russia's use of a key naval base in Crimea.

In contrast to the rosy ties with Kiev, relations between Moscow and Minsk have seriously deteriorated in recent months. Russian President Dmitry Medvedev on Sunday accused Belarusian President Alexander Lukashenko of trying to pass Russia off as the country's main enemy in a bid to boost his popularity ahead of presidential elections in December.

Gazprom will raise its gas price for Belarus from the current $185 to $220 per 1000 cubic meters in 2011, the company's Deputy CEO Andrei Kruglov said on October 1.