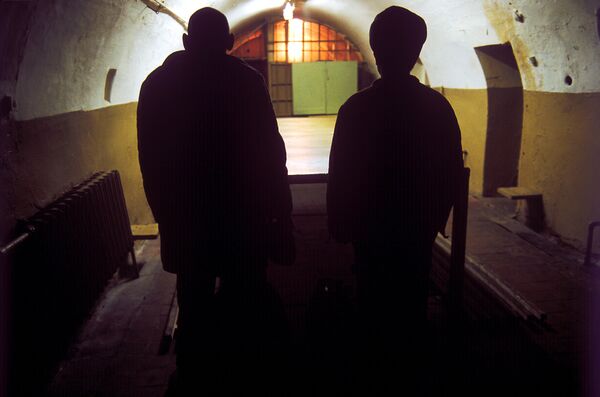 © RIA Novosti . Vladimir Vyatkin
/
Go to the photo bank
Subscribe
The death penalty has always been a controversial issue. Despite the fact that more than half of the world has officially banned capital punishment, opinion polls indicate an overwhelming support for such measure.

The death penalty has always been a controversial issue. Despite the fact that more than half of the world has officially banned capital punishment, opinion polls indicate an overwhelming support for such measure. Sergei Nikitin, head of Amnesty International's Moscow office discusses the arguments for and against capital punishment.

Samir Shakhbaz: Good afternoon, Mr Nikitin. Today, I would like to discuss capital punishment, one of the most controversial issues facing humankind. Does your organization reflect the majority opinion, or are you simply working professionally to prove that there is no place for capital punishment in the modern world?

Sergei Nikitin: Our organization has about three million members, and has been campaigning consistently and successfully for the abolition of capital punishment since the mid-1970s. Naturally, we reflect the opinion of our membership and that of many other people. Public opinion frequently tends to support capital punishment. But that is a subject for a separate discussion.

Shakhbaz: Why do you think there is such a difference between your opinion and public opinion?

Nikitin: We can assess public opinion through opinion polls, but the answers given often depend on the way the questions are formulated. The wording of the question is very important. That is the first point. Second, most people, luckily do not have close personal experience of the whole capital punishment issue and related nuances such as death sentences and their execution and so on. Consequently, people only have very limited information, and that has a direct influence on their decision. It is not an issue that people are educated about, if they knew all the details and the host of problems linked with capital punishment, they would change their minds.

Shakhbaz: How would you comment on the point of view that people who oppose capital punishment are devout believers guided by the fundamental laws of the Holy Bible?

Nikitin: I don’t share that point of view. I think religious beliefs do not necessarily influence a person’s stance on the capital punishment issue. There are some really brutal scenes in the Old Testament. At the same time, I would like to note that the Russian Orthodox Church shares our stance and also opposes capital punishment.

Nikitin: As for Europe, Belarus remains the only country stipulating capital punishment at legislative level, passing death sentences and executing convicts. After Minsk’s recent attempts to facilitate rapprochement with the Council of Europe, the latter said this would only be possible if Belarus abolishes capital punishment. Anyhow, in March 2010, Belarus executed two death-row inmates, thus considerably complicating its chances of joining the Council of Europe.

During the 20th century, capital punishment became history virtually across Europe. Although in various countries this was not a smooth process, we can now safely say that there is no chance that Europe will reinstate capital punishment. We can recall the 1950 European Convention for the Protection of Human Rights and Fundamental Freedoms, whose protocols 6 and 13 either restrict or completely abolish the death penalty. Protocol 6 is obligatory right across the Council of Europe. Countries that sign and ratify this document pledge not to use capital punishment, except in wartime. Protocol 13  abolishes capital punishment in wartime either. A number of European countries have ratified protocol 6 but have failed to ratify protocol 13. These are mere details because there is virtually no capital punishment in Europe. Although Russia has signed protocol 6, it has so far failed to ratify it.

Shakhbaz: So what, then, is your main argument? Why is killing wrong? If not because of what is in the Bible, then why? For instance, some people, including people who are incorrigible maniacs or murderers, are found guilty beyond any shadow of a doubt. Why should we spare their lives?

Nikitin: We are a human-rights organization. We think capital punishment amounts to premeditated and cold-blooded murder by the state, and that it constitutes a grave violation of human rights. This is the main guiding principle in our work. We oppose the violation of human rights in every sphere, including from the standpoint of capital punishment as the ultimate penalty and a very serious human-rights violation. I would like to note that …

Shakhbaz (Interrupting): Sorry to interrupt you, but what rights are you talking about? The defendant has violated all written and unwritten moral laws of society. A person cannot live in society and remain outside it. Hasn’t he already deprived himself of such rights, or can he still retain them?

Nikitin: Everyone has the right to life, as stipulated by all the main international documents. Those opposing such measures frequently base their pro-capital punishment arguments on emotions. I would like to stress that we feel great compassion for all those whose relatives have been murdered. Please don’t think that we are some kind of evil organization cynically and cold-bloodedly defending the rights of criminals. But the murder of individuals by the state remains a serious human-rights violation.

Shakhbaz: Do you see any progress in your organization’s work?