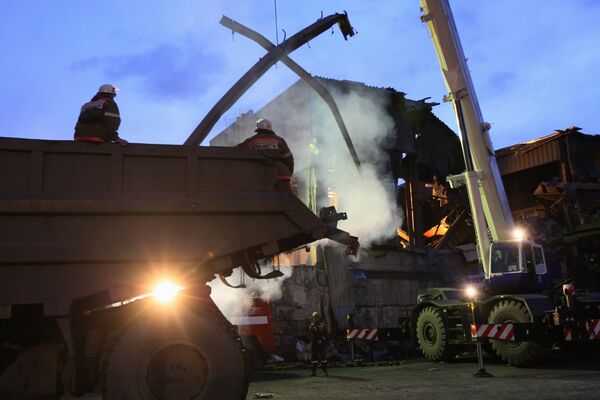 Almost five months after a deadly accident at a southwestern Siberian coalmine four dead bodies were recovered from it, bringing the official death toll to 72.

Almost five months after a deadly accident at a southwestern Siberian coalmine four dead bodies were recovered from it, bringing the official death toll to 72, a spokesman for the local administration said.

Raspadskaya, one of Russia's largest coalmines located in the town of Mezhdurechensk in Siberia's Kemerovo region, was hit by a methane blast late on May 8. Four hours later, when rescuers entered the mine, another blast followed. The death toll previously stood at 68, with 23 miners registered as missing.

"The dead bodies... were recovered at the depth of 67 meters," the source said.

The spokesman said that the bodies of 19 miners, who are still officially listed as missing, may be found at lower levels of the mine, which are now flooded.

"We are yet to find our way there, pumping out water and clearing the rubble," the source quoted the region's governor, Aman Tuleyev, as saying.

Rescue efforts were halted shortly after the second blast amid fears that more explosions may occur. Authorities started pumping water out of the mine only in mid-August.

Rescuers say they already pumped out more than two million of cubic meters of water and removed some 170 metric tons of rubble.

Investigators say the deadly blasts were caused by a breach of safety regulations.