Russia wants to improve legal base of relations with Abkhazia 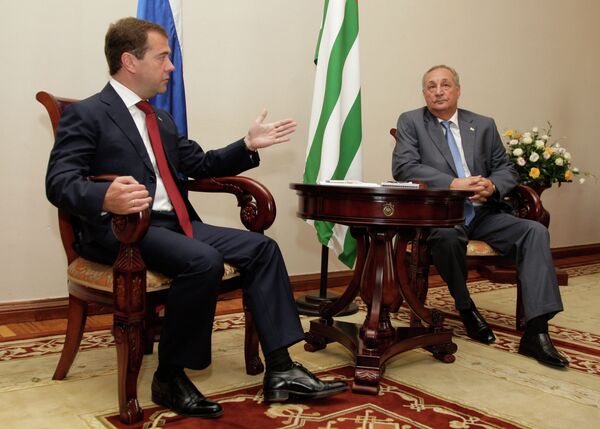 Russia hopes to strengthen the legal basis of its relations with Abkhazia, Russian President Dmitry Medvedev said on Thursday.

Russia hopes to strengthen the legal basis of its relations with Abkhazia, Russian President Dmitry Medvedev said on Thursday.

"We expect the further development of Russian-Abkhaz relations and the improvement of the legal basis of ties," Medvedev said in a congratulatory message to Abkhaz President Sergey Bagapsh on the republic's Independence Day.

"I am sure that this completely corresponds to the interests of the Russian and Abkhaz people - it boosts stability and security in the region," the Russian president added.

"This holiday symbolizes the longstanding desire of the Abkhaz people to determine their lives for themselves and to live in peace with all their neighbors," Medvedev added.

The Russian president also pledged to render aid to Abkhazia.

Russia recognized Abkhazia and nearby South Ossetia as independent states two weeks after a five-day war with Georgia in August 2008, which began when Georgian forces attacked South Ossetia in an attempt to bring it back under central control.

Since then, Russia has deployed thousands of troops and border guards to the two regions, which Georgia considers part of its sovereign territory.