Needed: A breakthrough with China 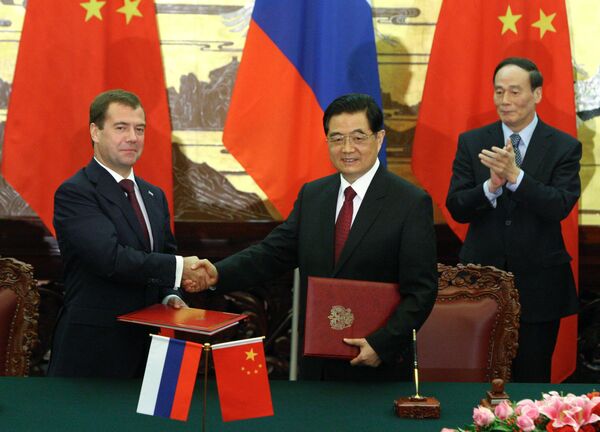 © RIA Novosti . Mikhail Klementiev
/
Go to the photo bank
Subscribe
The Russian President Dmitry Medvedev's visit to China, currently drawing to a close, or rather the preparations for it, unearthed the rather unpleasant statistic of 2% - this is Russia's trading position with its great neighbor.

The Russian President Dmitry Medvedev's visit to China, currently drawing to a close, or rather the preparations for it, unearthed the rather unpleasant statistic of 2% - this is Russia's trading position with its great neighbor. No matter how close their views may be on world events and international relations, 2% is not a purely economic indicator, it indicates policy and a not very favorable one at that. Particularly compared with U.S.-Chinese commerce at nigh on $300 billion a year (all figures are rough estimates because of the crisis: post-crisis statistics are only just beginning to emerge). And though Russian-Chinese trade turnover, judging from what Medvedev said, is set to return to its peak pre-crisis figure of $57 billion, there is a qualitative difference between it, and the U.S.-Chinese relationship.

Here it is worth taking a look at what has been happening between the United States and China over the past fifteen years. For America, China is an obvious strategic rival, something that is even more noticeable under the Democrats. But growing mutual economic dependence is causing these two rivals to tread cautiously and in a responsible manner. This is the kind of effect we should have pressed for in Russian-Chinese relations, because similar world views are a less substantive matter than factories or containers travelling across the ocean.

All this may give the impression that Medvedev's current visit is primarily concerned with the economy. This is true, but only in part. First, two documents signed by the Russian president and his Chinese counterpart Hu Jintao are worthy of closer scrutiny. One is a joint statement on the comprehensive deepening of Russian-Chinese partner relationship and strategic cooperation, and the other is a joint statement on the 65th anniversary of the end of World War II.

The Chinese civilization is more fastidious about words than many other countries. If "comprehensive deepening" is written, it is no mere turn of phrase. It is the result of painstaking efforts. The bottom line is: we will deepen political relations through the economy. And specifically through the famous (and somewhat beleaguered) Skovorodino-Daqin oil pipeline. The Russian president's state visit was timed to coincide with its launch.

It is, of course, an important event, especially if we recall the political infighting in Russia over the pipeline, and all the vacillation the project engendered. It is indeed a strategic project - Russia will greatly benefit if its neighbor, the world's second most powerful country, is tied to it with such solid links.

But this does not mean we can sit back and rejoice. The target is 15 million tons of oil a year. Current deliveries stand at 12 million tons. Seen in terms of bilateral relations, this looks promising. In 2008, Russian supplies declined, now they are looking up, even if figures cannot be merely added together - previously oil was transported by rail, while now it will be piped, and the ultimate result of this is unclear. Anyway, Russia's share in oil deliveries to China was gradually shrinking: from 11% in 2006, to 6.1% now. Perhaps it will recover, rising again to the original figure of 11%, or even exceeding it. But whatever happens, from China's perspective four other countries now outrank Russia in the major oil supplier stakes: Saudi Arabia, Angola, Iran and Oman.

Equally protracted gas talks have made some headway, but are still a long way from completion.

As regards energy supplies in general, this is a big issue in a different, strategic, sense. The key objective of Russian policy now is the country's innovative modernization, which implies developing new technology, exporting knowledge-intensive products rather than raw materials, and so forth. But this is where the two countries' interests have parted company over the years. China needs nothing but raw materials from Russia. As for the research-intensive products, China is manufacturing more and more of such products of better and better quality and exporting them to us. It was the case in the past that the good Chinese bought technology and the bad Chinese copied it for free. But the efforts China is making to develop its own intellectual property base are tremendous, and in general the focus of global innovation is now shifting to Asia, which, of course, includes China. Strategically, Russia has to draw up new conclusions.

Crude oil once made up half of all Russia's exports, with science-based exports near zero. Chinese hi-tech exports to Russia, on the other hand, are growing. How is all this seen through the prism of the Medvedev visit? It appears they talked only about energy cooperation - what can be done if China has such an interest... But in nuclear terms, the planned construction of a nuclear power plant in China comprising fast breeder reactors is hi-tech incarnate. And there is an ongoing discussion on high-technology cooperation, though it is not clear where it will ultimately lead. It would be best if it were to lead to some hi-tech breakthrough. That would be a good strategy.