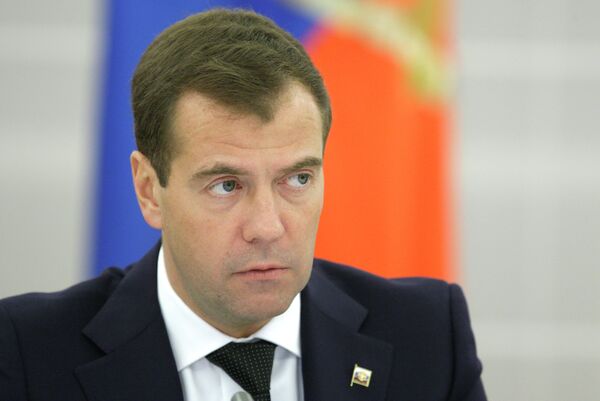 Cooperation projects, including in the energy sphere, and international issues will be discussed during Russian President Dmitry Medvedev's official visit to China, a Kremlin aide said on Friday.

Cooperation projects, including in the energy sphere, and international issues will be discussed during Russian President Dmitry Medvedev's official visit to China, a Kremlin aide said on Friday.

During a three-day visit to begin on Sunday, the Russian president will meet with Chinese leader Hu Jintao and other top officials in Beijing and attend the 2010 Expo in Shanghai.

"During the scheduled talks in Beijing, the two states' leaders will discuss in detail the whole range of Russian-Chinese cooperation. The discussions will focus on the further development of trade and economic ties, energy cooperation, trade structure improvements, boosting investment and inter-regional cooperation, as well as issues of ecology and migration," Sergei Prikhodko said.

Medvedev and Jintao will also attend a ceremony to launch the Chinese section of the Russian East Siberia - Pacific oil pipeline, stretching from the town of Skovorodino in the Amur region to the city of Daqing in China's northeastern Heilongjiang province.

The Kremlin aide said Russian-Chinese trade grew more than 56% in the first half of 2010 year-on-year to $25.5 billion.

"It gives us a solid foundation on which to hope that we will return to the level of pre-crisis trade turnover, which stood at $55.9 billion in 2008," he said.

The two leaders will also discuss environmental cooperation, including the rational use of trans-border water resources.

The forthcoming talks will also touch upon a number of international issues, including Iran's controversial nuclear program and tensions between the two Koreas.

"China is one of Russia's most active partners in maintaining strategic stability. Both countries promote collective decision-making in non-proliferation and arms control, and the principles of equal and indivisible security for all in missile defense issues," Prikhodko said.