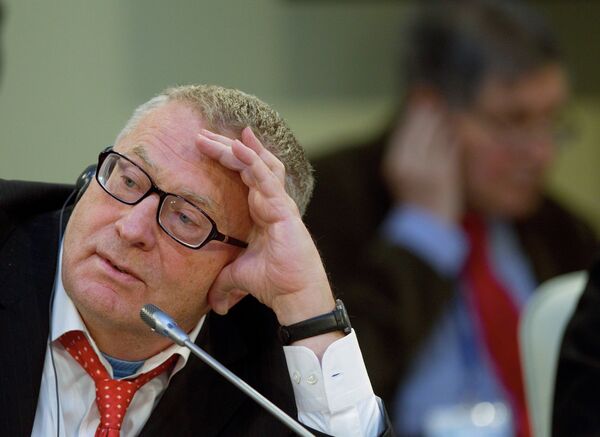 Outspoken Russian politician Vladimir Zhirinovsky used his birthday greetings to the embattled Moscow mayor to urge him to tender his resignation.

Outspoken Russian politician Vladimir Zhirinovsky used his birthday greetings to the embattled Moscow mayor to urge him to tender his resignation.

Luzhkov, who celebrates his 74th birthday on Tuesday, left for Austria on vacation on Sunday amid a media campaign against him and his billionaire wife Yelena Baturina.

"Do what you have long been expected to do: write a resignation letter quietly and calmly. Then this birthday of yours will go down in history," the leader of Russia's Liberal Democratic Party said in a statement, posted on the party's official website.

Zhirinovsky earlier suggested that Luzhkov might not return to Russia.

A source in the presidential administration told RIA Novosti that the Moscow mayor left on vacation for Kitzbuhel, one of Austria's fanciest ski resorts, to figure out his next moves.

The mayor was recently accused of massive corruption by federal TV channels. Earlier this month, a documentary aired by the NTV TV channel said Luzhkov's wife Yelena Baturina, the world's third richest woman, had used her husband's position to amass her wealth, reported by Forbes as $2.9 billion.

Some media reports quoted sources in the presidential staff and the ruling United Russia party as saying that the long-serving Moscow mayor would be fired no later than December.

Luzhkov's term expires in the summer of 2011. He earlier said he believed he would not be asked to leave the office beforehand.