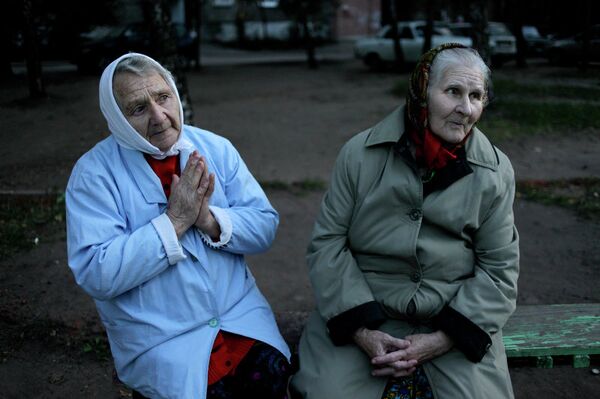 Russia’s worst drought in more than a century cut the wheat harvest forecast dramatically in farms across the country. The projected grain harvest has been estimated at 60-67 million tons, down from 97.1 million tons in 2009, hitting world grain markets.

The hulking green combine tractor clatters across a wheat field at the sprawling Maslovka farm, a typical autumn scene in Russia’s agricultural heartland.

This year however, the machine is not harvesting wheat but ploughing dead crops back into the cracked, sun-scorched earth, a symbol of a land hit by an unprecedented summer drought and savage forest fires.

“These are scary times,” says Karpa Osipova, 84, who lives on Lenin Street, a few blocks from the Maslovka farm.

“The prices of crops are slowly rising, and my pension isn't big enough,” says Osipova. “I don’t even know how I am going to be able to afford bread.”

The situation on Maslovka farm will affect not just whether Osipova gets her daily loaf of bread, but may also have a far-reaching impact on global bread supplies and food prices.

Not far from Osipova’s tiny brick cottage, Victor Milovanov, the director of Maslovka farm, speeds across fields in his silver SUV, monitoring winter-grain planting. Milovanov says this year’s harvest on his farm was three times lower than last year’s.

“We’re preparing for the winter, but we can already see that not much will grow,” he says. “This year was very hard for us. We lost 85 percent of our planned output. What will happen next year, we don't know.”

Russia’s worst drought in more than a century cut the wheat harvest forecast dramatically in farms across the country. The projected grain harvest has been estimated at 60-67 million tons, down from 97.1 million tons in 2009, hitting world grain markets.

On August 15, Russian Prime Minister Vladimir Putin announced a ban on wheat exports, saying it was needed to ensure domestic supply. The initial announcement said exports would be banned until the end of this year, but the embargo was later extended until next autumn’s harvest.

Within a day of Putin’s announcement, world wheat futures reached a two-year high of nearly $8 a bushel, from just about $4.50 in early June.

“We can only review lifting the ban on grain exports after next year’s crop is harvested and we have clarity on the grain balances,” Putin said at a government meeting in Moscow. “Extending the export restrictions will add predictability to the market”

Russia’s extended ban may contribute to higher global food prices, raising concern of a repeat of the 2008 food crisis, when grain prices reached record highs and riots broke out worldwide, according to analysts.

“The situation is serious. Many farms this year have harvested half last year’s figures,” says Andrei Sizov, the executive director of SovEcon, an agricultural research firm in Russia. “They now face a choice: either not to sow winter wheat, or sow it in the dry earth.”

Russia is one of the leading global grain exporters, accounting this year for 14 percent of global exports of wheat, flour and related products in the year to June 30, according to the U.S. Department of Agriculture.

The effect of rising wheat prices is reflected in the United Nations’ Food and Agriculture Organization’s (FAO) global food price index, which covers 55 food commodities. In the first week of September, the FAO said the index for August had hit its highest level in two years, largely driven by higher wheat prices.

The FAO has called a special meeting on September 24 for policy makers to discuss the recent rise in global food prices. The FAO says it is concerned by the speed at which prices have increased over the past two months

“In the past few weeks, global cereal markets experienced a sudden surge in international wheat prices on concerns over wheat shortages,” says the UN agency. “The purpose of holding the meeting is for exporting and importing countries to engage in constructive discussions on appropriate reactions to the current market situation.”

Despite concerns over global food prices, the head of the Russian Grain Union, Arkady Zlochevsky, is optimistic about the situation and doesn’t think the country is facing a grain deficit.

“There is no grain shortage in Russia and still no threat of a shortage,” Zlochevsky says.

“A lot will depend on the weather. Extremely bad weather is always a possibility, and if this comes to pass, then the ban on exports will likely remain in place so that we can meet domestic demand. I consider the current export ban a form of insurance.”

Amid the crop damage, Osipova and many other pensioners look back with nostalgia on the Soviet Union, saying its centrally-planned economy at least guaranteed they would have bread to eat.

“I may have had to stand in a long line, but at least I got my bread,” Osipova recalled. “Life was much easier back then. Now it’s just unpredictable.”