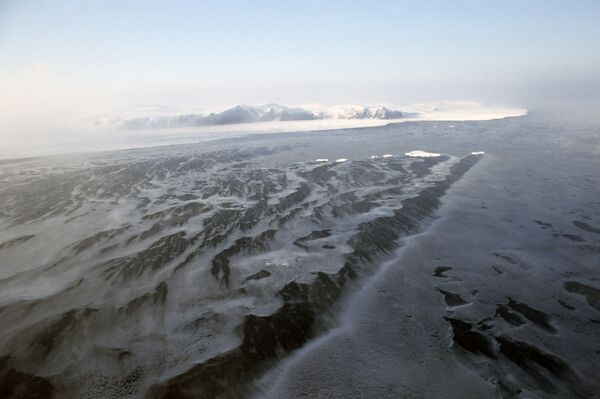 Recent developments in the Arctic, such as the discovery of new oil deposits off Greenland and border delimitation expeditions in the Arctic by various nations, suggest it is time to begin a serious dialogue on the region.

Recent developments in the Arctic, such as the discovery of new oil deposits off Greenland and border delimitation expeditions in the Arctic by various nations, suggest it is time to begin a serious dialogue on the region. Russia intends to do just this with the forum The Artic - Territory of Dialogue.

The forum has been organized by the Russian Geographical Society in association with the RIA Novosti news agency. It will be held in Moscow on September 22 and 23.

Proof that Russia takes Arctic issues seriously can be found in the fact that Prime Minister Vladimir Putin will attend the forum. Intended as an ongoing event, the forum will bring together dozens of Arctic experts from the United States, Canada, Norway, Denmark, and the European Union, as well as representatives of non-governmental organizations, members of the business community, politicians and lawyers.

Artur Chilingarov, President Dmitry Medvedev's commissioner for international cooperation in the Arctic and the Antarctic, believes that international conferences on Arctic issues, such as protecting its ecosystem and using its natural resources, could be arranged in the format proposed by Russia once a year, or once in two years. The goal of these meetings will be to strike a balance between national and international interests, with a focus on the state of the environment in the Arctic, which plays a major role in shaping the global climate, said Chilingarov, a noted polar explorer.

Ahead of the Moscow conference, Russia and Norway set a good example for other Artic nations by settling their territorial claims in the region, believed to contain vast oil and gas reserves. Moscow and Oslo signed a treaty on delimiting the two countries' maritime border and cooperation in the Barents Sea and the Arctic Ocean. The treaty was signed in Murmansk on September 15 in the presence of President Dmitry Medvedev and Norwegian Prime Minister Jens Stoltenberg. This treaty ends a 40-year dispute over an area of seabed some 175,000 square kilometers large (roughly half the size of Germany), which includes the Varanger Fjord, or the Varyag Gulf, in the Barents Sea. The zone will now be divided into two almost equal parts, with the continental shelf and exclusive economic zones of the two countries clearly drawn.

It would be naive to expect the Moscow forum to bring any major breakthroughs in longstanding Arctic disputes between the United States and Canada or Canada and Denmark, for example. Clearly, agreements like the recent Russia-Norway treaty cannot be reached overnight and without the proper diplomatic and legislative groundwork. But the event may help determine the trajectory of Arctic development.

Russia, Canada, Denmark, Norway and the United States - the five countries with Arctic coastlines - have always had claims to the abundant natural resources stored in the Arctic seabed. The need to delimit maritime borders in the Arctic Ocean is becoming even more pressing with the increased melting of polar ice. But since each nation has its own idea of how the area should be divided, reaching a consensus will be no easy task.

On September 16, Russian Foreign Minister Sergei Lavrov met in Moscow with his Canadian counterpart, Lawrence Cannon. Mr. Cannon said Canada intends to provide scientific evidence proving that the Lomonosov Ridge is Canadian territory. Three expeditions from Russia, Canada and the United States are currently carrying out research in the Arctic to substantiate their respective counties' claims to this underwater mountain.

The current Russian expedition aboard the research vessel Academician Fyodorov will come to an end in October, and then a fresh team of explorers will set out. Their primary objective is to collect evidence to back up Russia's Arctic shelf bid, which it will submit to the UN Commission on the Limits of the Continental Shelf in 2013. Moscow made its first such application in 2001, but that one was rejected for a lack of scientific evidence. The only other country to have submitted a similar bid is Norway in 2006.

According to estimates, Russia's territorial claims for the Arctic span an area of some 1.2 million square kilometers. This is almost as much as the territory of Western Europe. Nearly a quarter of the world's mineral wealth is believed to lie under this Arctic Klondike, and the recovery of those reserves from deep beneath the sea is possible using modern technology.

The Arctic region's extractable reserves include an estimated 90 billion barrels of oil and 50 billion cubic meters of natural gas. The actual amount may prove even greater. American experts claim the Arctic boasts 30% of global gas reserves and 13% of oil. Most of the local oil deposits are believed to be located off the coast of Greenland and the U.S. state of Alaska, while natural gas is concentrated in the Arctic's Russian sector.

Luckily, much of the Arctic's mineral wealth lies within 300-500 nautical miles from the coastline (according to the U.S. Geological Survey), so there will be no need for mining operators to break through the ice hummocks of the North Pole. Hydrocarbon deposits in Russia's Kara and Barents Seas are believed to contain as much as 9-10 billion tons.

Each of the five Arctic nations seeks the lion's share of continental shelf deposits, so it remains unclear how their interests could be reconciled. Yet, Russian experts do not think a new treaty on Arctic reserves is needed. They believe that any disputes, territorial or otherwise, can be settled with the help of the 1982 UN Convention on the Law of the Sea. This is, indeed, a powerful regulatory instrument, an international marine constitution of sorts, which is designed to regulate operations above and below the sea surface. Unfortunately, not all of the convention's signatories have ratified it (the United States is just one example). Another complicating factor is that each of the five countries with Arctic coastlines has territorial claims on a neighboring country. But then again, conflicts of interest over how to divide mineral reserves are hardly surprising, especially given the ever increasing demand for energy in today's world.

Hopefully, the Arctic forum in Moscow will offer some mutually acceptable solutions.