The passion of the Roma à la russe 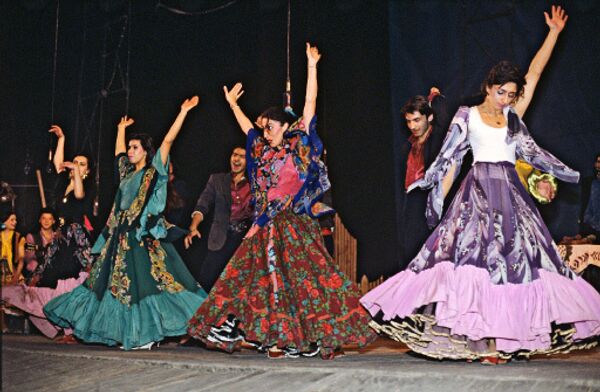 Romani culture, with all its controversial practices such as fortunetelling and horse theft, has been part of Russia's multicultural landscape for several centuries, and the attitude toward Roma people in this country has remained tolerant, if not friendly, from the beginning.

Romani culture, with all its controversial practices such as fortunetelling and horse theft, has been part of Russia's multicultural landscape for several centuries, and the attitude toward Roma people in this country has remained tolerant, if not friendly, from the beginning.

France's current deportations of Roma immigrants may be hailed as a sensible measure by Italy, Denmark, Belgium, Sweden, the Netherlands and other European nations that are about to follow suit, but to the Russians, this idea defies all logic.

The Russian Roma community now numbers 200,000 according to official estimates, while its members themselves put the population at half a million. And yet the community has never felt alien or pariah in this country, where Roma began to settle some 300 years ago. The first Romani groups came to Russia from Poland and were almost immediately granted Russian citizenship. Many of them converted into Orthodox Christianity, the country's dominant religion. A Senate decree of 1733 allowed Roma immigrants to reside here and engage in traditional occupations such as horse trading. Under this decree, they could join any estate, and in the 19th century Roma could be found among entertainers, merchants, bourgeoisie, and peasants.

In the 20th century, an era of sweeping changes in Russia, repeated attempts were made to acculturate Russian Roma, many of whom continued to maintain their traditional nomadic lifestyle. For instance, during the Bolsheviks' campaign to collectivize farming across Russia, traditional horse markets were outlawed, depriving Roma who traded in horses, stolen or otherwise, of their main source of income. The Soviet authorities also sought to make the Roma community settle in permanent residences. But many of its members chose to settle voluntarily after the Second World War. They took up farming and various crafts, blacksmithing being the most popular by far.

During WWII, Soviet Romani fought against the Nazis both as part of the regular army and guerrilla units. On occupied land, they were hunted down as targets of the Nazis' genocidal campaign. Many Roma in Russia survived thanks to sympathetic Russians who warned them of danger and offered them a place to hide.

On October 5, 1956, the Soviet parliament issued a decree intended to force all Roma "vagabonds" to give up their nomadic lifestyle and take mainstream jobs. This rather tough law was mitigated by certain economic incentives, such as free housing and land.

As for the Roma's cultural identity, it has never been infringed upon in this country. Moscow's Romen Theater, whose shows feature traditional Roma dances and songs, has garnered widespread popularity and acclaim with people of all ethnicities. Russian filmmakers have also helped promote Romani culture. Director Alexander Blank's 1979 television series "The Gypsy" ("Tsygan") with popular Soviet actors, and an earlier production by Emil Lotyanu, "A Gypsy Band Takes to the Skies" ("Tabor ukhodit v nebo") both enjoyed instant success with Soviet audiences.

Russia's interest in Romani art has a long history, predating the Soviet era. Many local aristocrats and members of the bourgeoisie had a strong passion for Gypsy songs and dances. Paradoxically, the lyrical chansons performed by Gypsies from Russia were widely regarded in Europe in the 20th century as an original Russian art form, and the emotional intensity of these songs was thought to be a manifestation of the deep Russian soul.

During Russia's trade boom of the 1990s, many Roma began travelling abroad for goods they could resell back home for a profit. Other traditional Romani occupations were revived during this time. Large families resorted to theft and swindling. Some also got involved in organized crime, including drug trafficking, contract killings, and fraudulent real estate schemes. In the criminal underworld, each tribal Romani group had its own speciality.

Fortunetelling, a traditional Romani occupation, became the most common livelihood for Russia's Roma people in the post-Soviet period. They also tried their hand at some new businesses, notably drug trafficking, and proved quite successful at it. According to St. Petersburg's anti-narcotics watchdog, it was Tajik people who took care of wholesale heroin supplies to Russia's second largest city, while Roman got involved in distribution, dealing drugs along with members of the Azerbaijani community. The Roma mafia, with its tradition of mutual responsibility, managed to build an extensive drug trafficking network, whose extreme secrecy made it difficult to detect.

Brazen acts, whether outlawed or legal, are quite typical of Russia's Roma people. Defiance, after all, is a major cultural trait of theirs. Naturally, many in Russia are surprised to see Roma in France now acquiesce to deportation. The cash compensation offered by the French authorities (300 euros for every adult and 100 euros for a child) may be part of the reason behind their orderly exodus, but it does not explain everything.