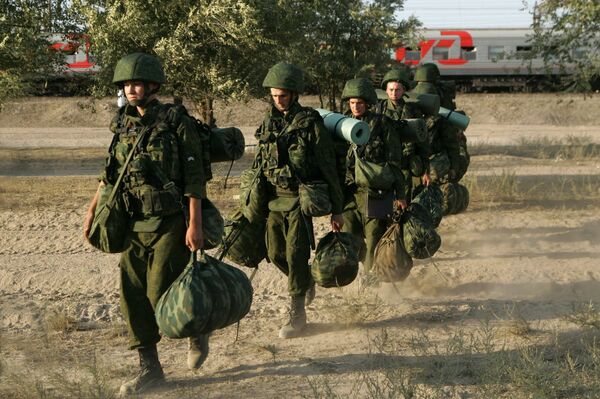 The SCO, a key Asian entity, continues to improve multilateral military cooperation in a region where that is currently the most important objective.

The exercise aims to streamline methods for combating terrorist and separatist groups during medium and low intensity local conflicts.

The SCO's future development and its enhanced role in facilitating regional stability and security directly depend on the ability of its member-states to be effective in their fight against these phenomena.

It is impossible to overestimate the SCO's role here. At the same time, the SCO has no intention of turning into a military bloc. However, the military aspects of intra-SCO cooperation are crucial given the context of ongoing developments in Afghanistan and recent civil unrest in Kyrgyzstan.

Consequently, the entire world is following the actions of SCO member-states closely.

Military cooperation among SCO member-states does not boil down to the struggle against terrorism and separatism. Multilateral defense sector and technological cooperation also plays a highly important role.

The Russian units involved in the exercise are using their experience of the five-day August 2008 Russian-Georgian conflict over the breakaway republic of South Ossetia. The troops involved also conduct mountain operations, an important aspect of any hypothetical Central Asian conflicts.

Moreover, the interests of all the SCO countries are directly affected by the conflict in Afghanistan and its possible spread to adjacent territories. Afghan drug trafficking poses another major threat, primarily to Russia and other post-Soviet republics, because most Afghan drugs are smuggled into the post-Soviet space.

At the same time, the struggle against Afghan drug trafficking is impossible without cooperation between the SCO and NATO, which NATO is still reluctant to see. The reason for this reluctance is understandable. An anti-drug campaign would swell the number of annoyed Afghans, and overnight the situation NATO forces face in this country would be aggravated.

Russia considers reducing the northerly trafficking of Afghan drugs to be of critical importance. Moscow, which has so far proved unable to eradicate Afghan drug plantations, has long been expanding its cooperation with other post-Soviet republics, and has been helping them establish viable security agencies and secret services that in turn would be able to at least cut drug trafficking.

This cooperation is conducted within the format of the SCO and the Collective Security Treaty Organization (CSTO), viewed by many as the SCO's military wing. Although this is not the case, it is impossible to deny the fact that the two organizations are interlinked.

Current developments in Central Asia, primarily those in Afghanistan and Kyrgyzstan, pose a serious test for both the SCO and the CSTO. In effect, they also present a test for Russia which considers the creation of these organizations and their operation to be its achievement, and with good reason.

Should the SCO and the CSTO manage to prevent the spread of conflicts and to stabilize the regional situation, it would be possible to draw optimistic conclusions about the prospects for cooperation between their member-states.

However, much depends on the readiness to act promptly and resolutely, using all available means, including military force, to put an end to violence. Otherwise all these troop exercises will remain purely theoretical, designed to create a particular image, but devoid of any real content.