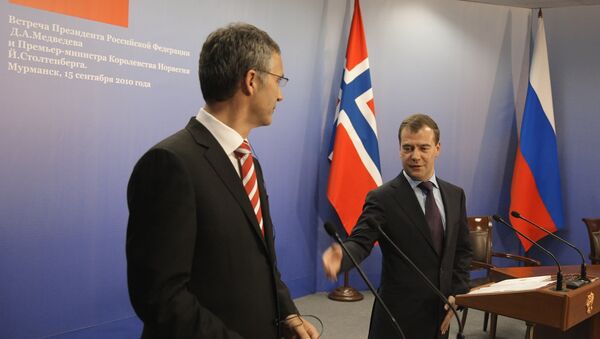 Russia and Norway signed a deal on Wednesday to delimitate their maritime border after 40 years of negotiations.

Russia and Norway signed a deal on Wednesday to delimitate their maritime border after 40 years of negotiations.

The document was signed after talks between Norwegian Prime Minister Jens Stoltenberg and Russian President Dmitry Medvedev in the northern Russian city of Murmansk.

Medvedev said the treaty would "open a new page in bilateral relations" and boost cooperation in the energy and fishing sectors.

"This event should influence the general situation in the region, strengthen the regime of international and regional security and improve further cooperation between the Arctic states," Medvedev said, adding that the parliaments of the two states would ratify the treaty simultaneously.

Russia and Norway have been disputing the 175,000 square km area in the Barents Sea and Arctic Ocean since 1970. The absence of defined maritime border often resulted in detentions of fishing vessels in the region.

The deal is expected to boost energy cooperation between the two countries, as it paves the way for the lifting of a 30-year-long moratorium on oil and gas extraction in the disputed zone.

A source in the presidential administration said the deal was important for supporting Russia's claim to extend its Arctic continental shelf area beyond the 200-mile limit.

"Undoubtedly, this treaty will make a substantial contribution to strengthening the legal regime in the Arctic, based on the 1982 UN Convention on the Law of the Sea, and to supporting the atmosphere of peace and cooperation there," the official said.

He said that according to the treaty "every deposit, crossed by the demarcation line, may be used only jointly and as a single entity."

"This approach deals with possible disputes about hydrocarbon resources effectively and in advance," the official said.

"It is very important that the governments of Russia and Norway made nature preservation a priority above other aims and tasks while planning and carrying out industrial activity in the Barents Sea," said WWF Russia Conservation Programme Director Victoria Elias.