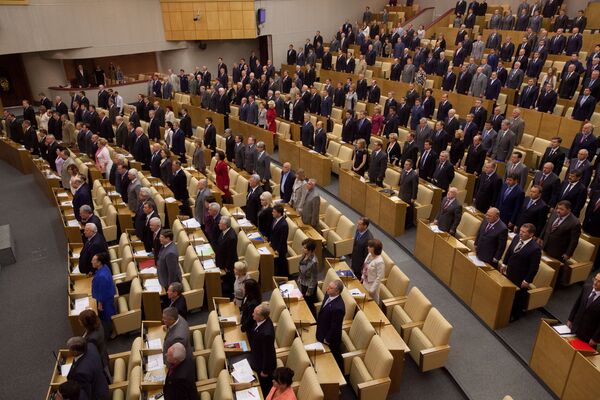 The lower chamber of the Russian parliament, the State Duma, will consider a bill to ban heads of Russian regions from referring to themselves as "presidents."

The lower chamber of the Russian parliament, the State Duma, will consider a bill to ban heads of Russian regions from referring to themselves as "presidents."

The vast majority of regional leaders are known as governors, but 21 of Russia's republics have presidents. The North Caucasus republic of North Ossetia was the first to scrap the presidential title in May 2005.

The head of the Russian North Caucasus republic of Chechnya, Ramzan Kadyrov, announced the decision to change his title in August this year, and the president of neighboring Ingushetia, Yunus-Bek Yevkurov, voiced his intention to follow suit.

The idea to devise a common title for regional heads has been under discussion for a long time, and Kremlin sources say that the process may be launched now on a voluntary basis.

"In my personal opinion, [the bill] is reasonable and unification is necessary. A single state should have one president, and top regional officials should have other titles," said Viktor Usachev, who heads the State Duma's regional policies committee.

The idea to adopt a single name for regional heads was first voiced in 2001, along with the start of a reform to bring regional constitutions in line with the Constitution of Russia.

Russian President Dmitry Medvedev said last year that a "recommended set of titles" was "theoretically possible," but the issue should be discussed at the regional level first.

State Duma Speaker Boris Gryzlov proposed this January all top regional heads should change their title to "the head of a Russian region."