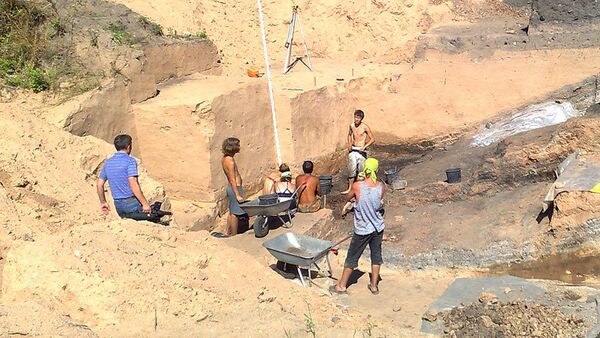 The remains of Ivan VI of Russia, an ousted Russian 18th century infant tsar who spent most of his life in solitary confinement, have probably been found in northern Russia, the head of an amateur search group said on Monday.

The remains of Ivan VI of Russia, an ousted Russian 18th century infant tsar who spent most of his life in solitary confinement, have probably been found in northern Russia, the head of an amateur search group said on Monday.

After the remains of Russia's last Tsar Nicholas II were identified and reburied, Ivan VI remains the only Russian emperor whose place of burial is unknown.

"During excavations in Kholmogory, we managed to find the remains of Russian infant Emperor Ivan VI Antonovich. Up until this moment, his burial site remained unknown," the head of the search team, businessman Anatoly Karanin, said.

Ivan VI was proclaimed Emperor of Russia in 1740 at the age of two months and five days, and overthrown during a coup d'etat a year later. At the age of four he was isolated from his parents and kept in solitary confinement in the town of Kholmogory near the White Sea.

In 1756, the ousted tsar was transferred to the Shlisselburg Fortress outside St. Petersburg, where he was anonymously kept and known as "a certain prisoner." He was stabbed to death by prison guards at the age of 23, when an attempt was made to free him.

Karanin said the discovery was made in 2008, when his group opened a tomb which was initially thought to be that of Ivan VI's father, Duke Anthony Ulrich of Brunswick.

"I immediately understood that this was not 60-year-old Ulrich of Brunswick. It was a young man," Karanin said.

"The huge hexag-shaped coffin made of very thick wood showed that it was a 'transport burial,'" which means that it [the coffin] was brought from afar," he added.

He, however, did not explain the reason why the body was carried to Kholmogory, which is more than 1,000 km away from Shlisselburg Fortress.

A forensic examination of the remains concluded that it was "highly probable" that the remains belonged to Ivan VI. It was discovered that the skeleton belonged to a man who died at the age of 25, give or take three years, and the grave was at least 200 years old.

The skeleton had a scratch on its left shoulder blade, consistent with a stab of a hexagonal blade that Ivan VI's guards had. In addition, the skull had a healed mark of a stiletto stab, perfectly coinciding with an injury from which the child emperor nearly died at the age of six months.

"This all proves that the remains may belong to Ivan Antonovich. We are 100% sure of that," Karanin said.

"We need the support of federal authorities to complete the legal identification process by conducting a DNA test," said Vladimir Stanulevich, secretary of the guardian council of the Emperor Foundation.

He added that Ivan VI's siblings are buried in Denmark, and taking their DNA samples would require diplomatic effort.

Some Russian historical experts have already expressed doubts about the report, saying that the amateur group lacked both official permission and expertise for archaeological excavations at the site.