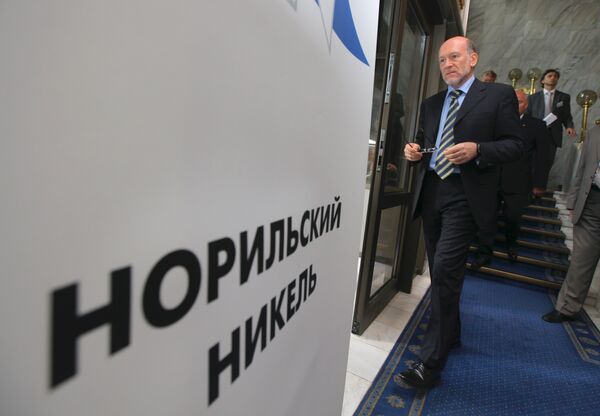 The investigation was initiated by RusAl, the world's largest aluminum maker, which holds a 25 percent stake in Norilsk. After a June annual shareholders' meeting, it holds three seats on Norilsk's board, while Interros, also a 25 percent shareholder, has three. But Norilsk management, including Interros senior manager Andrei Klishas holds four seats and independent directors three.

RusAl filed a request with the FFMS asking it to investigate the results of the AGM. RusAl has accused Interros of ruining agreed board parity and vote fraud. The aluminum giant also claimed that shareholders were not informed about a decrease of the quorum to 75.7 percent from 92 percent.

RusAl said that third persons' votes were added to elect other candidates than Norilsk's former head of the board Alexander Voloshin.

Kommersant quoted two sources close to Norilsk's shareholders as saying that the FFMS found that third persons' votes were given by BoNY.

Also, RusAl, as an interested party, was struck off a list of voters to prolong an agreement with Normetimpex sales company.

"Formally, this is not a breach of law," a source quoted by Kommersant said. "Indirectly points to a possible collusion between Norilsk management, Interros and the depositary," another source told the newspaper.

The FFMS has found no violations in the decrease of the quorum, but the service is continuing its investigation, one of the sources told the newspaper.

RusAl has initiated a Norilsk extraordinary shareholders' meeting to be held on October 21, where it wants to re-elect the board of directors.