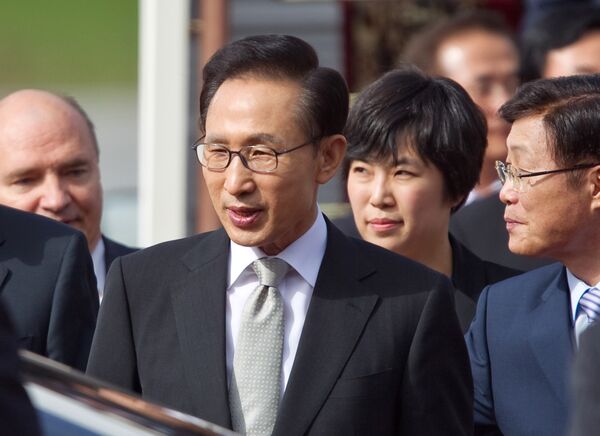 South Korean leader Lee Myung-bak, whose presidency has seen a deterioration in ties with North Korea, expressed readiness on Friday to work towards better relations with Pyongyang.

South Korean leader Lee Myung-bak, whose presidency has seen a deterioration in ties with North Korea, expressed readiness on Friday to work towards better relations with Pyongyang.

"We would like relations between the South and the North to move towards normalization, and in this relation we see a very big interest and help from the international community," Lee told the Russian Vesti 24 TV channel.

He said it was impossible to predict when Korea would reunify, but "we do not think that we will unite [only] if North Korea collapses one day."

The establishment of "peaceful relations" with the North and subsequent close economic cooperation between Seoul and Pyongyang would allow "talking about peaceful reunification at the next stage," Lee said.

Inter-Korean economic projects and agreements have been shelved since Lee took office in 2007, putting an end to a decade-long period of Seoul's so-called Sunshine Policy towards the North.

Ties between Seoul and Pyongyang soured even more after Seoul accused Pyongyang of sinking the 1,200-ton South Korean Cheonan corvette. The vessel sank near the disputed Northern Limit Line in the Yellow Sea on March 26 causing the loss of 46 lives.

"Although the incident with the Cheonan has taken place... I believe that relations with North Korea will move towards normalization again if it offers its apologies," Lee said.

The North Korean leadership, who deny the South's accusations, has also requested apologies from Seoul.

The two countries remain technically at war, since no peace treaty was signed following the Korean War in 1953. The so-called Demilitarized Zone between the countries is the most heavily armed border in the world.