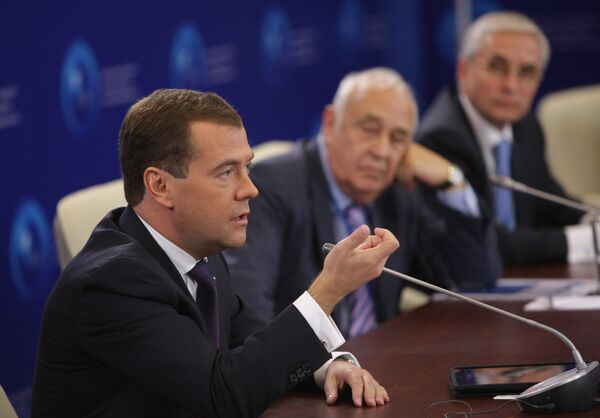 Russian President Dmitry Medvedev has said any changes to the country's political system should be gradual.

Russian President Dmitry Medvedev has said any changes to the country's political system should be gradual.

Ever since replacing Vladimir Putin as president in 2008, Medvedev has urged a "modernization" of the country's political and economic system, and made it clear he wants to listen to non-governmental organizations.

"Modernization can only be carried out by free people... a man who is afraid of the government, law enforcement agencies, opponents, and life is unable to engage in modernization," Medvedev told the Global Policy Forum in Yaroslavl.

"The development of democratic institutions gives people an incentive for modernization," he said, adding that "something has been done in this in the past two years."

The head of the presidential human rights commission, Ella Pamfilova, who resigned in July amid pressure from hard-line inter-government groups, complained earlier this year that Russia's democratic institutions are underdeveloped.

"We can, of course imagine a different political system in Russia; for instance, parliamentary democracy," Medvedev said. "Our Kyrgyz friends have chosen this path but I will tell you, this is a catastrophe both for Russia and Kyrgyzstan."

Most Kyrgyz voted to make Kyrgyzstan a parliamentary republic at a referendum in June. The referendum came in the wake of inter-ethnic violence in the country's south, in which at least 400 people were killed, earlier in June and ousting of former president Kurmanbek Bakiyev in April.