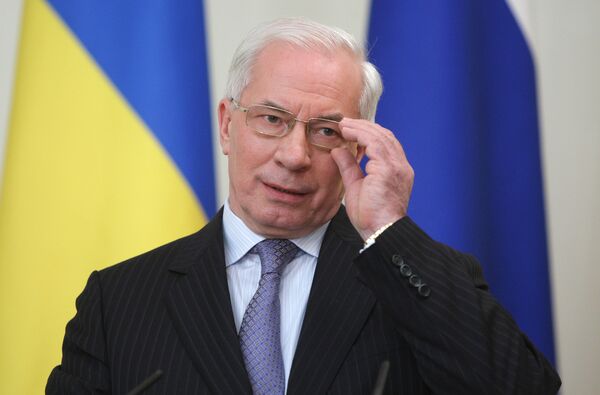 © RIA Novosti . Alexey Druzhinin
/
Go to the photo bank
Subscribe
Ukrainian Prime Minister Mykola Azarov says he is doing all he can to learn the Ukrainian language.

Ukrainian Prime Minister Mykola Azarov said on Thursday he was doing all he could to learn the Ukrainian language.

Like many people in Ukraine, Azarov has never learned the national language, as Russian is widely spoken in the former Soviet republic, especially in the east, Crimea and the capital.

Ukrainian President Viktor Yanukovych has criticized officials for their lack of Ukrainian and demanded they learn the language.

“I am doing everything possible [to learn the language] - reading all the documents and writing instructions in Ukrainian, learning to speak,” Azarov said.

However, a draft law in parliament does provide for a significant expansion in the use of Russian in the country.

Under the bill, Ukrainian will remain the only state language in the country but the use of "minority" languages will expand, ruling Party of Regions lawmaker Vadim Kolesnichenko said this week.

"The bill brings Ukraine closer to European standards and implements the European Charter for Regional or Minority Languages," the head of the Russian-Speaking Ukraine public movement said.

It would lift restrictions on the use of Russian in all key spheres of public life - television, advertizing, cinema, local self-government, the judiciary and education.