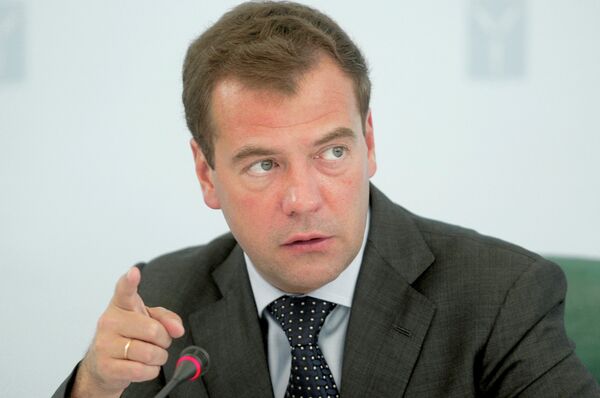 Russian President Dmitry Medvedev said on Thursday police are to spare nothing to track down and destroy those responsible for the terrorist attack in the southern Russian city of Vladikavkaz.

Russian President Dmitry Medvedev said on Thursday police are to spare nothing to track down and destroy those responsible for the terrorist attack in the southern Russian city of Vladikavkaz.

At least 16 people were killed and 98 injured in a suicide car bombing in Vladikavkaz, the capital of the country's North Caucasus republic of North Ossetia. Many injured are in critical condition.

The blast occurred near the city's central market around midday, police said.

The bombing is the latest in a series of terrorist attacks in the troubled North Caucasus in recent weeks.

Speaking with the president of North Ossetia, Taimuraz Mamsurov, Medvedev expressed his condolences over the incident and said the culprits will be punished.

"We will do our best to track down those beasts who committed the terrorist act against ordinary people, a heinous terrorist act," he said.

"We will do everything to find them and punish them in accordance to our country's law, and destroy them if they offer resistance," he added.

Medvedev earlier called on officials to start investigations into the incident.

The Vladikavkaz market has been the target of two earlier terrorist attacks.

Medvedev's envoy to the North Caucasus, Alexander Khloponin, is on his way to Vladikavkaz on the president's orders.

North Ossetia, as well as neighboring Dagestan and Chechnya, have seen increasing violence in recent years, with shootings and bomb attacks becoming shockingly common. Officials have vowed to clamp down on militant groups.