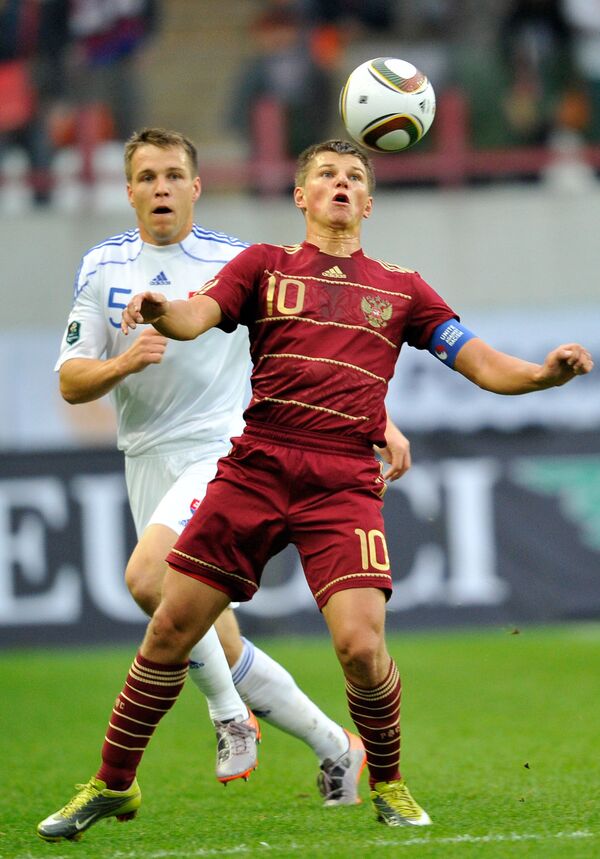 A defensive mix-up proved fatal for Russia in Moscow on Tuesday evening as Slovakia took all three points in a Euro 2012 qualifier.

A defensive mix-up proved fatal for Russia in Moscow on Tuesday evening as Slovakia took all three points in a Euro 2012 qualifier.

The defeat was just the second home loss in a European championship qualifier in the history of both Russian and Soviet football.

Russia started the match the brighter, with Igor Semshov, Roman Shirokov and Alan Dzagoyev going close in the opening 20 minutes.

But a badly-hit clearance by goalkeeper Igor Akinfeev in the 27th minute left CSKA Moscow teammate Vasily Berezutsky stranded and Miroslav Stoch thundered a shot into the Russian net.

Russia came forward again in search of an equalizer and Stuttgart forward Pavel Pogrebnyak wasted a great chance, shooting wide from close in.

Slovakia, proving that their progress to the last 16 at this summer’s World Cup was no fluke, always looked dangerous on the break and could have easily doubled their lead were it not for two Akinfeev saves in quick succession.

Russia’s new trainer Dick Advocaat had selected an attacking line-up for his first competitive home game in charge of the side, but the final pass so often went astray as the team looked to level the score. When they did eventually find the net through Konstantin Zyryanov, some 10 minutes after the break, the linesman rightly flagged for offside.

Arshavin then spurned a good chance when he shot wide from close range.

Advocaat brought on Tottenham Hotspur’s Roman Pavlyuchenko for Pogrebnyak with 20 minutes to go, but the striker, lacking regular match practice at his club, had little impact.

A fierce Dzagoyev free-kick was kept out by Slovak keeper Jan Mucha as the clock ticked down, and the referee waved away a penalty claim after Alexander Anyukov fell in the box.

Slovakia now have six points from a possible six, while Russia, after Saturday’s 2-0 victory over minnows Andorra have three points.

Russia's next fixture is away to Ireland next month. The Irish, who also have three points, host Andorra later this evening.