Medvedev to hold talks with Norwegian PM in Russia's Murmansk 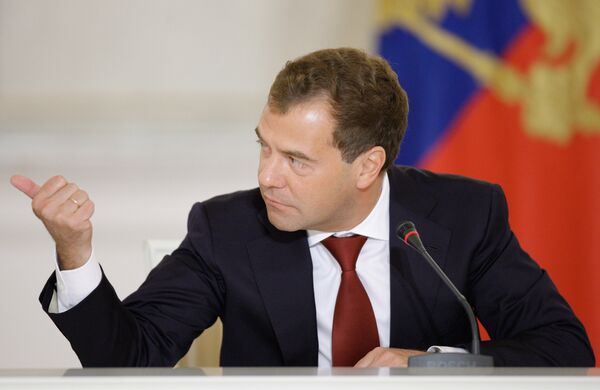 Russian President Dmitry Medvedev will hold talks with Norwegian Prime Minister Jens Stoltenberg in Russia's northern city of Murmansk on September 15, the Kremlin said in a statement on Tuesday.

Russian President Dmitry Medvedev will hold talks with Norwegian Prime Minister Jens Stoltenberg in Russia's northern city of Murmansk on September 15, the Kremlin said in a statement on Tuesday.

"Bilateral agreements will be signed in the presence of Russian and Norwegian heads," the statement said.

Russia and Norway plan to sign an agreement on their borders in the Barents Sea.

After almost 40 years of talks, Russia and Norway reached in April an agreement on the demarcation of their maritime borders in the Barents Sea and the Arctic Ocean.

Under international law, the five Arctic Circle countries (Russia, Norway, the United States, Canada, and Denmark) each have a 322-kilometer (200-mile) economic zone in the Arctic Ocean. An area of 175,000 square kilometers has been the issue of the dispute between Norway and Russia.

The Arctic territories, believed to hold vast untapped oil and gas reserves, have increasingly been at the center of disputes between Russia and Norway. Rising global temperatures are also leading to the reduction in Arctic Sea ice, which is making the Northern Sea Route navigable.

The trial journey was aimed at proving the economic feasibility of the northern alternative to the southern route lying through the pirate-infested Indian Ocean, Transport Minister Igor Levitin said last month.

The Northern Sea Route cuts the journey time between Russia's northwestern ports and Pacific rim states. It also cuts the length of the route from Northern Europe to Northeast Asia and the northwest coast of North America compared to southern sea routes via the Suez or Panama canals by up to 40%.

The Northern Sea Route is also the shortest seaway from the ports of Western Europe and Russia to the Far East and Southeast Asia.

The Northern Sea Route was officially opened to international shipping by the Soviet government in 1991, but has not yet been seriously used as a commercial route. It is now mainly used by Russian metals giant Norilsk Nickel and energy firms LUKoil, Gazprom and Rosneft.