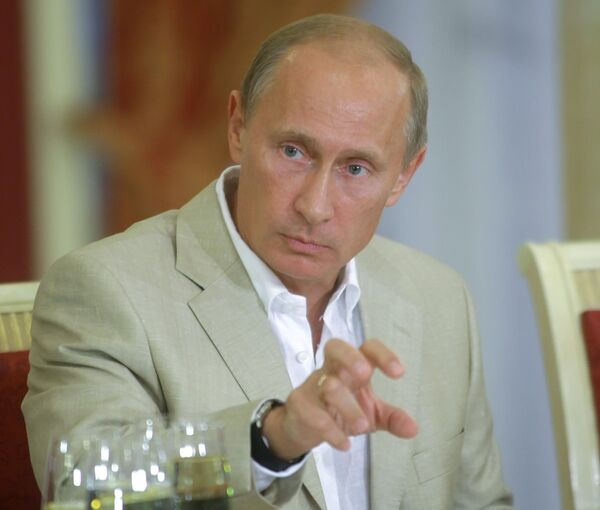 © RIA Novosti . Alexey Nikolsky
/
Go to the photo bank
Subscribe
Russian Prime Minister Vladimir Putin shows no signs of wanting to quit politics anytime soon, an expert said after a meeting of the Valdai International Discussion Club with the premier in Sochi on Monday.

Russian Prime Minister Vladimir Putin shows no signs of wanting to quit politics anytime soon, an expert said after a meeting of the Valdai International Discussion Club with the premier in Sochi on Monday.

"I don't think he is looking forward to retiring," Andrew Kuchins, director of the Russia and Eurasia Program at the Washington-based Center for Strategic and International Studies, said.

He also noted that Putin had confessed he had "no desire to quit working."

The expert went on to say that the Russian premier was "engaging and dynamic" and "far more relaxed and in a better mood than at the previous Valdai discussions."

Kuchins said that even when issues like the Mikhail Khodorkovsky case were brought up, which had previously irritated Putin, the Russian prime minister did not fly into a temper.

In Kuchins' view, one of the most important moments during the meeting came when Putin was asked about the separation of powers.

In a reply, which was perceived by the participants as pointing to the relationship between Putin and President Dmitry Medvedev, Putin said that "one person should not hold all the power."

The 7th Valdai Club Meeting runs from August 31 to September 7. The discussion brings together prominent experts on Russia from 15 European countries, the United States and Asia.