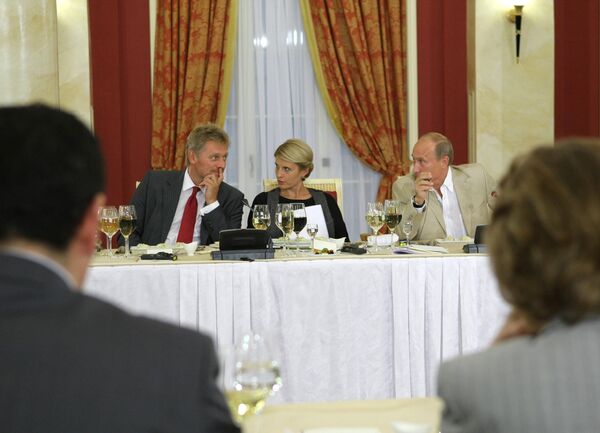 © RIA Novosti . Alexey Nikolsky
/
Go to the photo bank
Subscribe
Russian Prime Minister Vladimir Putin sees money as the answer to the resolution of a large number of issues, an expert said after a meeting with the premier on Monday.

Russian Prime Minister Vladimir Putin sees money as the answer to the resolution of a large number of issues, an expert said after a meeting with the premier on Monday.

“Every response to every question came down to a question of money,” Fiona Hill, director of the Center on the United States and Europe at Brookings, told RIA Novosti after a meeting of the  Valdai International Discussion Club, an expert forum for international specialists on Russia, in the Black Sea resort of Sochi.

“Every question had an economic answer to it,” she went on. “It also seemed that if enough money could be put into something, be it…investment, infrastructure, you name it, it could be resolved.”

“Even for the big political questions, where people were expecting a different answer, it all came down to money,” Hill said.

“There was a long question to him about the importance of really devolving power away from the hands of one person, and he said, ‘Well, I’ve done that, I’m now sharing power with President Medvedev and he’s taking up an awful lot of roles’.”

“There was the sense that by creating the tandem, by creating the division of labor between the two of them, then in many respects the question of the institutionalization of the system was, for now at least, resolved,” she concluded.

The Valdai International Discussion Club’s seventh regular conference runs from August 31 through September 7, and focuses on the topic “Russia: History and Future Development.”