Will Russian cities get their casinos back? 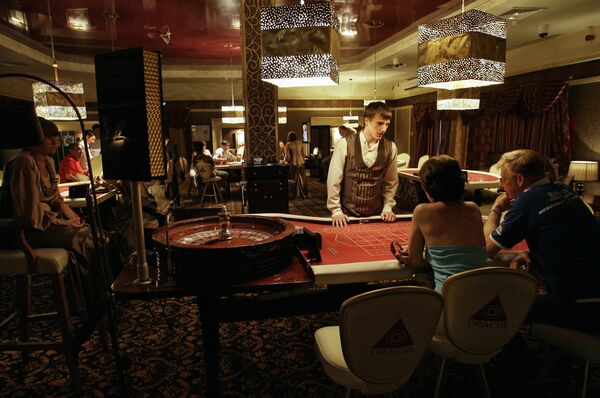 © RIA Novosti . Sergei Vinyavski
/
Go to the photo bank
Subscribe
Russians are no longer confronted by a dazzling abundance of casinos and gambling dens on their city streets or slot machines at supermarkets. In the past 12-plus months since the enactment of a nationwide gambling ban, some gambling establishments have gone deep undercover, while others have changed their name and become lottery clubs.

Russians are no longer confronted by a dazzling abundance of casinos and gambling dens on their city streets or slot machines at supermarkets. In the past 12-plus months since the enactment of a nationwide gambling ban, some gambling establishments have gone deep undercover, while others have changed their name and become lottery clubs.

Technically speaking, gambling is legal in just four gambling zones, including Azov City, where the Orakul (Oracle) casino has already opened to the public and the Shambala casino is scheduled to open on September 3. Meanwhile, gambling tycoons are still trying to reverse the course of events. The Russian Association for Gaming Business Development (RAGBD/RARIB) proposes the relocation of gambling zones closer to major cities, and the Russian Union of Industrialists and Entrepreneurs (RSPP) is calling for casinos at five-star hotels.

Krasnodar Territory Governor Alexander Tkachyov was the first to note the need for the gambling zones to be relocated. Several weeks ago, Tkachyov sent a letter to President Dmitry Medvedev, requesting the relocation of the Azov City gambling zone from the border between the Krasnodar territory and the Rostov Region to Anapa, a popular Black Sea resort, because the remote zone attracted neither players, nor investors.

Dmitry Slobodkin, deputy chairman of the RSPP's commission for tourism, hospitality and the entertainment industry, says these gambling zones should be relocated as close as possible to Russia's 13 major cities in order to facilitate legal nationwide gambling, and that such zones need not be built from scratch.

Investors are not interested in projects like this that require significant infrastructure outlays on municipal utilities, roads, airports and hotels. Such zones attract fewer players because they are located at such a distance from major cities.

Under federal law No. 244 dated December 29, 2006, "On the State Regulation of Activity to Organize and Conduct Gambling," all gambling houses were to have been relocated to the above-said four zones by July 1, 2009. However, there are no such zones in operation.

The only casinos under construction or actually operating are in Azov City alone. Investors have only been chosen for the Sibirskaya Moneta (Siberian Coin) and Primorye gambling zones in the Altai Territory and Russia's Far East, and their construction has not yet commenced. No competitive bidding for the contract to develop the Yantarnaya (Amber) gambling zone in the Kaliningrad Region, Russia's Baltic exclave, has been held to date.

The affluent business community was to have financed the lion's share of gambling zone construction projects in Russia. PricewaterhouseCoopers estimates the gambling industry's turnover nationwide in 2008 at $3.6 billion (minus the bookmakers' turnover). The National Association of Bookmakers says bookmaker offices earned $1.7-1.9 billion that year. So, it seems that gambling zones failed to open on July 1, 2009, simply because gambling tycoons were in no mood to finance their development. And we should not count on other investors choosing to operate there, RAGBD/RARIB Council Chairman Valery Ivanov says.

There are several reasons for this. Regional estimates submitted to the Ministry of Finance suggest that it may take 30-35 years for gambling zones to recoup themselves even under the most optimistic forecast, Slobodkin says. At the same time, gambling houses usually start making a return five to seven years after they open. Investors also complain of all-out corruption, unstable legislation and the lack of various privileges and breaks.

Apart from the relocation of these gambling zones, gambling-business representatives would like to open casinos at five-star hotels in central major-city districts boasting all the required existing infrastructure and numerous prospective clients. Moscow alone has over 20 such hotels.

If the government were to support the businessmen's proposals, the whole idea behind establishing these isolated gambling zones to minimize their negative impact on the population would be rendered irrelevant. Ludomania, or the pathological addiction to gambling (from the Latin word Ludos meaning game), was among the main reasons for shutting down all the gambling houses in Russian cities. Although this country does not keep records of the numbers of people suffering from this addiction, the American Gaming Association estimates that 14% of Russians have tried their luck with slot machines at least once, and that about 10% of them have succumbed to gambling addiction, squandering 40% of their budgets at gambling houses.